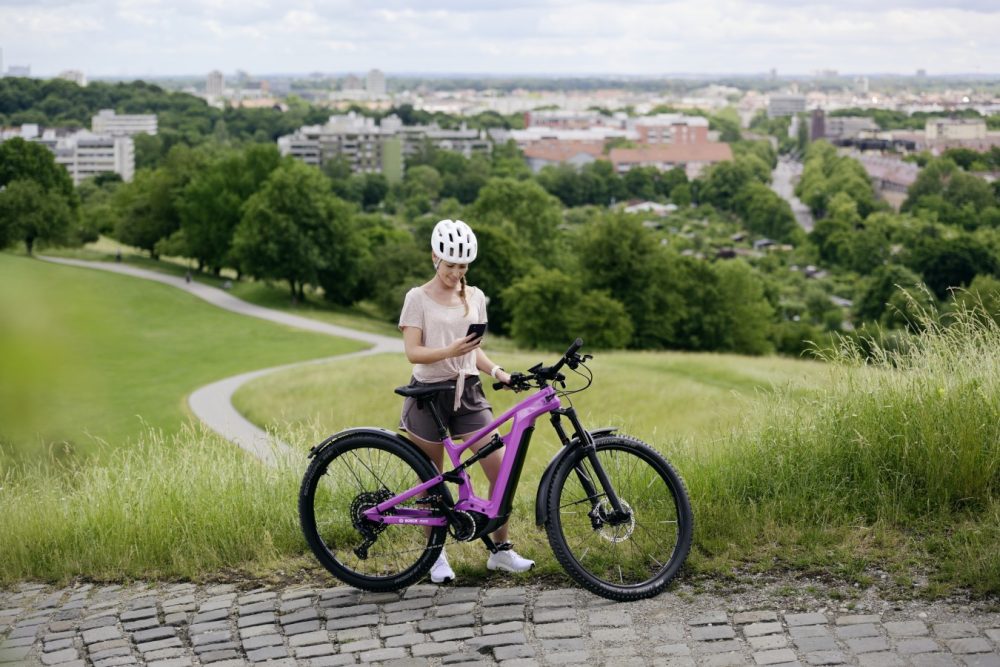 It’s no longer just a pandemic fad. Ebikes are here to stay, and stay in a big way, as evidenced at the CES in January.  Not only were there electric bikes of every shape and size introduced — everything from sleek road bikes and 007-style snow bikes to understated escooters and electric motorcycles — but also, for the first time, the Las Vegas show had a dedicated eMobility Experience testing area outside for ebikes and escooters.

So, not surprisingly there was a slew of new ebike and emobility introductions around the 65,000-square-foot test track at CES 2022. Mainstream bicycle brand Giant, for example, introduced a commuter model aimed at new riders, or those returning to two wheels after a hiatus. In the group’s Momentum line, the new Voya E+ weighs just 40 pounds, a lightweight considering that ebikes typically weigh 55 pounds to over 70 pounds. Voya E+ models will start at $2,300 and feature batteries that run cooler, have a longer life cycle, and are wrapped in fire-proof gel, the company said.

“Making the battery safe is a big thing for us,” said Matthew Smith, e-bike business manager for Giant in the U.S. “And we’re one of the few companies that don’t compete with our retailers,” Smith underscored in an interview with Dealerscope. Many of the newer ebike companies sell directly to consumers.

Aventon, for example, sells through dealers as well as directly online to customers. At CES, Aventon introduced a budget-oriented commuter bike, the Soltera. Designed to be simple and easy to maintain, a basic, single-speed model starts at $1,299. The Soltera has both pedal assist and full-throttle modes, with a top speed of 20 mph.

Interestingly, at least one ebike and escooter sharing company made moves at CES to enter the retail space. Santa Monica, Calif.-based Bird, best known for its escooters that pepper some urban sidewalks, announced new models for consumers to purchase in both bike and scooter categories. The pedal-assist Bird Bike offers a 50-mile range and a $2,299 price tag. And for minimal maintenance, the ebikes feature a rear hub motor and a Gates Carbon fiber belt drive rather than the traditional chain and derailleur combination.

In addition, Bird bowed a non-electric scooter for kids, the three-wheeled Birdie Glow for $99. For adults, the company added an escooter, the Bird Flex for $599. Both models will be available at Target or from the company’s online store.

Advances in ebike systems also promise more new products to come later this year. Bosch eBike Systems, one of the major ebike technology suppliers to companies such as Trek and Gazelle, received a CES 2022 Innovation Award for its new connected ebike package. It includes a mid-drive motor, battery, and controller all connected via Bluetooth to an eBike Flow app. The app means bike makers can offer new digital features such as automatic activity tracking and personalized riding modes.

“So it is able to evolve after the purchase,” said Claudia Wasko, general manager of Bosch eBikes, in an interview with Dealerscope, “we can add new services and new updates over the air.” Wasko said that connectivity for ebikes is a “megatrend” that will continue to transform ebikes; next year she anticipates built-in anti-theft systems and additional safety features will be added, for example.

Ebikes are also evolving into bigger and more varied designs. Stockholm, Sweden-based Cake, for example, debuted its line of work electric motorbikes. Among models coming in the spring is the company’s Makka “smart electric moped” that does 28 mph and starts at $3,800. The company offers a welter of options for cargo and even trailers for its ebikes, as well as new functions for its Ridecake software. The program works with a Cake Connect module to deliver real-time riding information, anti-theft features, and fleet management software for business owners.

At the other end of the spectrum, for pure fun, there was the Moonbike from Annecy, France. The French startup introduced what looks like something from a James Bond movie: a ski and tractor tread equipped ebike for snow-covered mountain excursions. Aimed at back-country adventurers, the Moonbike starts at $8,500, has a top speed of 28 mph, can climb a 40 percent grade, and will run for about an hour and a half on a single battery.

In the Vespa-style category, Segway (yes, that Segway) introduced two new escooters at CES: the P100S and P60. Both models feature more advanced elements to make them more road-worthy, including turn signals, wider tires, and wider footboards. Segway already has an eMoped C80 electric bike on the market for about $2,200. (With a top speed of 20 mph, it doesn’t require riders to have a license.)

Naturally, the electrification of two-wheeled vehicles extends all the way up to exotic electric motorcycles. The banana yellow Damon HyperFighter Colossus drew plenty of stares at CES. The eccentric electric motorcycle has a range of 146 miles and does 0 to 60 mph in 3 seconds, with a hair-raising top speed of 170 mph. Although the bike sounds expensive at $35,000, it offers outstanding thrills and performance for a fraction of the price of a Tesla S.

Indeed the variety of ebikes and associated electric modes of transportation at CES demonstrated that there is lots of room for future innovation and growth. Giant’s Smith also underlined the fact that it’s still a largely untapped market where consumer electronics retailers can help get new customers into the market, supplying expertise and accessories.

“We’re in the Atari and Commodore 64 era of ebikes,” said Smith, “and we’re nowhere near the iPhone era — but we’re going to get there very quickly.”