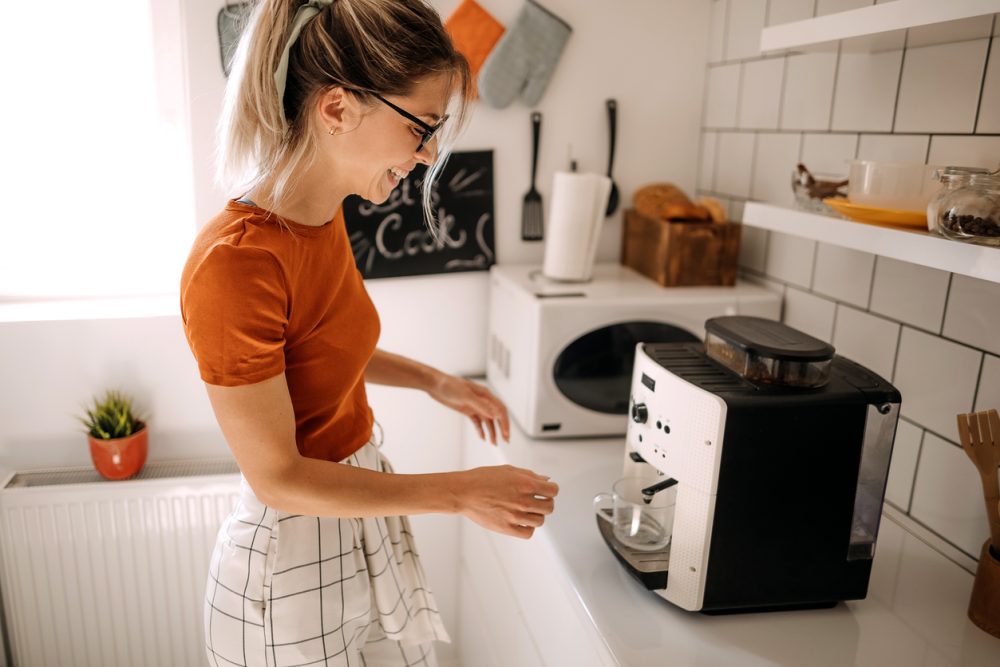 Inflation, hybrid work, the escalating costs of eating out—they’re all trends driving consumer buying habits in kitchen countertop appliances. And while manufacturers don’t expect to see the same stratospheric levels of sales witnessed during the height of the pandemic, they do expect continued growth in smarter appliances over the next year.

“During COVID, demand was off the charts,” said Dan Unger, corporate communications manager at Panasonic, “so we’re not going to continue to see that, but we’ll still see positive growth this year.”

Consumers also say that in the post-pandemic world they plan to continue healthy eating habits such as cooking at home versus hitting fast-food restaurants. In one survey, 92 percent of families said they plan to continue eating together at home with the same regularity after the pandemic. The survey, conducted by sales and marketing agency Acosta, also found that 20 percent of respondents said they expect to eat at home even more frequently in the future.

No doubt, those findings have been bolstered by the inflationary spasms experienced over the past few months, which have driven the cost of dining out even higher. Indeed, a more recent Acosta survey found that 54 percent of consumers are cutting back on going out for meals due to inflation.

No Furby of the Kitchen

However, as consumers return to some of their pre-pandemic activities and busy lifestyles, “we expect them to continue choosing appliances that will make cooking easier and more convenient through technology and meaningful innovation,” said Jessica Shuck, consumer insights senior manager for GE Appliances.

But there’s no single product that’s expected to catch on like the great Instant Pot craze of 2019. However, one countertop appliance feature is definitely in demand: smart connectivity. At the IFA consumer electronics show in Berlin last September, where white goods dominate, many manufacturers were showing app-controlled appliances, including those from the likes of Panasonic, LG and Samsung. IFA exhibitors expect remote control to be a popular theme this year, and according to one study, consumers are keen on such features, with 35 percent of respondents reporting that the most important feature in appliances is wireless smartphone control.

Wi-Fi connections in appliances have an added benefit in that they allow manufacturers to upgrade products over the air. When GE Appliances rolled out an air fryer software update, for example, in a little over a month 13,000 owners had downloaded the upgrade, and there was 143 percent jump in the use of air fry modes on connected ovens, according to the company.

The Internet-connected trend has even filtered down to coffee makers, such as GE’s Wi-Fi connected Cafe that can be controlled and programmed remotely using the company’s SmartHQ app. For consumers who need to be caffeinated as soon as possible in the morning, it’s a convenience they can’t live without. GE says its data and analytics teams has found a strong affinity among consumers for stylish and tech-forward designs. The $349 GE Café Specialty Drip Coffee Maker reflects those trends and like others now in the market it has received the Specialty Coffee Association’s certification that covers brewing temperature and time specifications.

“Through the pandemic, consumers realized the benefits of unattended cooking with slow cookers over other appliances,” said Pennington. “Now with the return to work, the appeal of slow cookers increases as they offer the ability for food to cook while the consumer is at the office. In contrast, air fryers offer fast or short cooking cycles making them useful for cooking dishes quickly.” Air fryer ownership, for example, is still a mainstay with 52 percent of households owning at least one air fryer as of March 2022, according to GE.

Manufacturers and retailers will still have to be alert to unexpected cooking trends in the coming year, thanks in part to the power of social media. Nugget ice makers, for example, had a low profile until they became an Internet sensation with TikTok videos touting the appeal of restaurant quality, chewable ice at home. So who knows? If the right videos go viral, the next appliance craze could be ice cream makers or pasta machines.

Once just a convenient way to quickly heat up a slice of leftover pizza, toaster ovens have become something of a Swiss Army knife in today’s kitchens offering — not just for toasting but also convection cooking, slow cooking and even air frying. GE’s $219 Digital Air Fry 8-in-1 Toaster Oven epitomizes this new all-in-one trend.

As one might expect, the GE 8-in-1 excels in traditional countertop oven tasks. The toaster function, for example, has 7 shade settings, from light to dark—plenty of variety to accommodate our tastes and different breads—and the digital control gives users precise baking control up to 400 degrees. It also performed admirably in convection cooking, delivering crispy on the outside but tender on the inside chicken. Additional cooking modes include broiling and “proof” for maintaining a warm temperature that’s ideal for helping dough rise before baking.

Many consumers will, however, be most interested in the added air fryer feature, which can be a healthier way to cook because it doesn’t require oil and is faster than baking. In our cooking tests, the oven did an excellent job as an air-fryer, belying the idea that consumers need a separate, dedicated air fryer. It can also accommodate more food for air frying than the usual small baskets in air fryers, which usually only hold enough vegetables or frozen chicken for one or two people.

The GE 8-in-1 does not include Internet connectivity. But if consumers want remote Web control, there’s the GE $449 CAFÉ Couture Oven with Air Fry that has Wi-Fi connectivity. The Wi-Fi feature also allows for voice to control via Google Assistant or Amazon’s Alex, as well as the ability to download new recipes and features.

In survey after survey, consumers complain that while they might enjoy cooking, they hate cleaning up. So it’s noteworthy that the GE oven possesses one of the easiest to clean crumb drawers we’ve ever seen. It pulls out straight from the front and its smooth, stainless-steel surface makes it easy to wipe down or wash with soap and water. It’s not a high-tech component, but after dinner, it’s a very welcome feature.