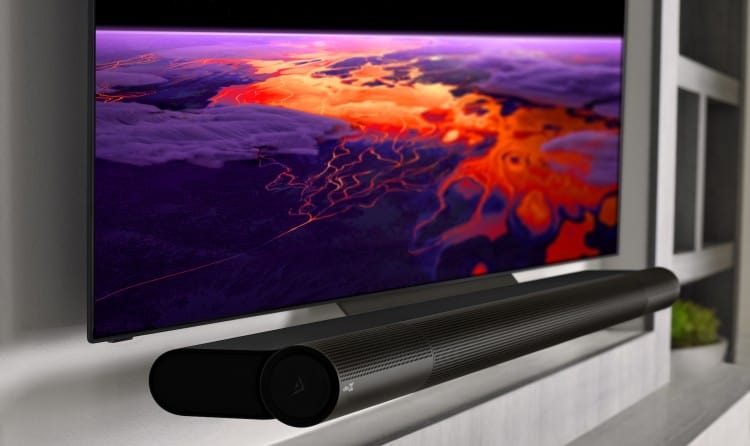 VIZIO has announced details of its first-ever 4K OLED TVs, due out in Fall, and has also released information about its Elevate premium immersive audio sound bar, also shipping then.

The VIZIO OLED 4K HDR SmartCast TVs (in 55- and 65-inch screen sizes; $1,299.99 and $1,999.99, respectively) feature self-emitting pixels and the company’s IQ Ultra processor, as well as a borderless 4mm-thin aesthetic. The TVs are designed to integrate with the new Elevate Sound Bar, a 5.1.4-channel Dolby Atmos and DTS:X audio solution with Adaptive Height Speakers.

The slim-profile sets’ pedestal base with an aluminum finish is designed to dock with the separately available Elevate 5.1.4 Sound Bar ($999.99). The Elevate uses built-in Dolby Atmos and DTS:X decoding to produce audio through its 18 speakers across 10 channels for immersive surround sound, even from above. The system is composed of a sound bar, a wireless subwoofer, and a pair of rear surround speakers. During a media preview of the lineup, VIZIO’s Carlos Angulo, director of product marketing, characterized the Elevate’s speaker effect as “set apart from [usual] sound bars.”

In the sound bar itself, separate tweeters and dual woofers per channel enable clearer dialogue. The Elevate’s 48-inch anodized aluminum body contains Adaptive Height Speakers – two patent-pending front speakers that automatically rotate upward when Dolby Atmos or DTS:X content is detected, which, along with two upfiring speakers in the surround speakers behind the listener, reflect sound off the ceiling for immersive overhead surround sound. The rotating front speakers then return to the forward position with stereo and standard surround content to create a wider soundstage, and increased volume.

The wireless sub’s 8-inch speaker adds bass down to 30Hz. In addition, the Elevate sound bar includes all the features found in VIZIO’s new V-Series and M-Series sound bars, including Bluetooth, a Voice Assistant Input, HDMI (3 eARC) ports, and more.

In terms of both styling and performance, VIZIO OLED TVs and VIZIO Elevate Sound Bar were literally made for each other. Elevate has the ability to dock securely onto the VIZIO OLED TV stand with a click, whether they’re hung on a wall or placed on a tabletop.

VIZIO’s OLED TVs can also take advantage of a growing library of 4K entertainment with HDR and Dolby Atmos audio that is available to stream now, via VIZIO SmartCast. An updated VIZIO SmartCast platform was also part of the announcement, offering faster navigation, more content than earlier iterations, and a host of work-from-home features as well as improved smart home functionality, says the company. The latest version of SmartCast is included with all new VIZIO TVs, and is also automatically updated on VIZIO SmartCast TVs dating back to 2016.