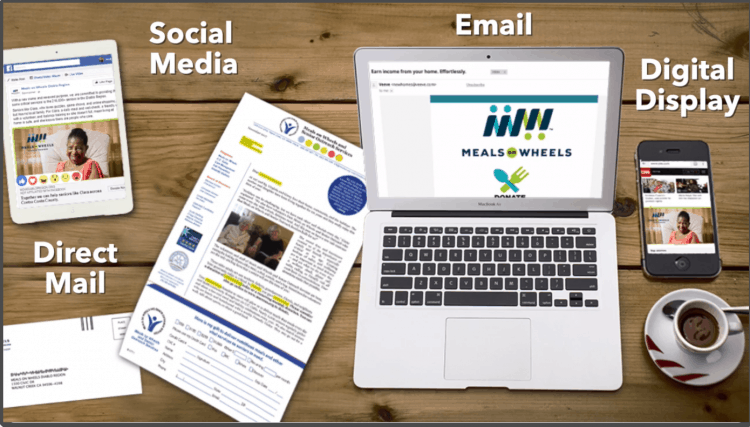 No marketing virtue pays off quite as much as being focused on your target audience. While many businesses still use spray-and-pray marketing to beg for sales as widely as possible as often as possible, smart brands are applying data sciences and channel optimization strategies to narrow their focus and deepen engagement with the right kinds of prospects on the right channels.&nnbsp;

Here’s how three brands refocused their marketing and increased ROI with some of today’s best omnichannel marketing techniques.

By focusing omni-channel donor cultivation efforts on a tightly targeted segment of potential donors, Meals on Wheels Diablo Region in California brought in $230,000 in new donations.

The campaign was designed around a holiday giving appeal to help support the Meals on Wheels mission: Feed and help the elderly in the local community for Christmas. First, Meals on Wheels worked with data analysts to study its donor data and identify list segments that would be most responsive to this campaign. This helped prevent wasting budget on unlikely donors, and also made sure brand value was not compromised by pestering unlikely prospects.

Then, Meals on Wheels sent a campaign of 75,000 direct mail appeals. These were personalized letters featuring infographics highlighting the ways Meals on Wheels benefits the community. The CTA was a personalized tear-off coupon for donors to send in with their gifts. But the mailstream was just the beginning of the campaign.

Meals on Wheels also targeted the people on its lists with email, social media, and online display advertising designed to amplify the direct mail message. Together, this added 467,542 additional marketing impressions for the campaign — more than a 600% increase in overall brand exposure.

How valuable was that extra exposure? Meals on Wheel Diablo Region converted nearly $230,000 in donations from the campaign and 43% of the donors were new to the non-profit. Donors who received the omni-channel touch points gave an average of 169% more than donors who only received direct mail.

Galileo Learning operates 75 children’s summer camps across parts of California and Chicago, Ill., but with age limits on attendees, large portions of the customer base graduate out of the program every year. This makes lead generation and customer acquisition a primary challenge Galileo must meet.

To refill those camp seats without breaking the bank, Galileo partnered performed a response-lift analysis.

With a customer modeling tool purpose-built to identify new direct marketing opportunities, Galileo used real data from its existing customer lists to identify look-a-like audiences among prospect lists and databases who would be most likely to respond to its offering and message.

Summer Erickson, head of marketing for Galileo Learning, said the “customer modeling tool was a game-changer for us.”

As an organization, Galileo had concerns that direct mail could be too expensive for the camp. Three things helped Erickson keep costs down and response up to ensure the campaign would be profitable:

With nearly eight times more impressions on an audience modeled for increased response, the campaign brought in 155 new campers and $66,000 in new revenue. Not only was it a success, Erickson says the results surpassed her most optimistic expectations.

Building community is a goal of any good marketing campaign. For Cornerstone Fellowship, a church that operates pop-up worship services across the San Francisco Bay area, it was the entire goal.

However, there was a limiting factor: Cornerstone had no interest in attracting worshippers from other congregations. Instead, the Fellowship wanted to engage members of the community who were not yet worshipping locally and perhaps needed some connection and fellowship in their lives.

Without building on existing audiences, Cornerstone needed a way to target people who were just coming to the area. That’s where a months-long direct mail campaign targeting “new movers” began.

This durable engagement device allowed recipients to easily remember where they could find a group ready to help them settle into the area and feel welcome. Email and digital ad campaigns were deployed at the same time to help raise awareness of the congregation and support the postcards.

The campaign delivered 100,000 print and digital impressions over four months. During that time, Cornerstone saw a significant increase in attendance and activity on the QR Code.

Omnichannel marketing is not just for Fortune-500 brands with Madison Avenue ad agencies. With a little data analysis and a plan to tie online and offline marketing together, any brand can amplify the impact of its marketing to get a better response and great ROI.