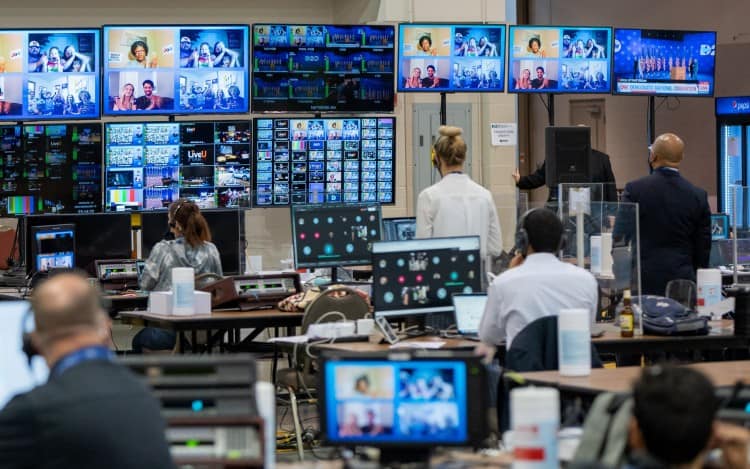 LG Electronics USA was selected as the Official Technology Provider for the 2020 Democratic and Republican National Conventions, and its TVs were also named as the “Official 4K UHD Displays” of both, in this unusual election year where the COVID-19 virus made technology more of a crucial element than ever.

Under its agreement with the Democratic National Convention Committee, LG supplied 4K Ultra HD displays to support the Milwaukee-based video production of live speeches and pre-recorded segments from across the country throughout the Aug. 17-20 convention. The 43-, 55- and 65-inch LG screens were at the heart of the convention’s multimedia control center in the Wisconsin Center, the convention’s nexus for hundreds of feeds from all 50 states and the virtual hub for media coverage worldwide.

As Official Technology Provider for the Aug. 24-27 Republican National Convention, LG supplied 4K Ultra HD displays to support convention operations in the Charlotte (N.C.) Convention Center, where delegates gathered for the nomination roll call and for various meetings. Complementing onsite activities, the 65- and 75-inch LG screens installed in VIP viewing areas and greenrooms showed live speeches from Washington as well as pre-recorded segments from around the country.

“Innovation is non-partisan, but it plays a critical role in political conventions, especially this year, due to the pandemic. As official provider, LG was proud to help make this year’s reimagined digital conventions a reality. Our role as a key technology partner underscores LG’s position as a technology and policy leader in the United States,” commented John I. Taylor, senior vice president, LG Electronics USA, in the announcement statement.