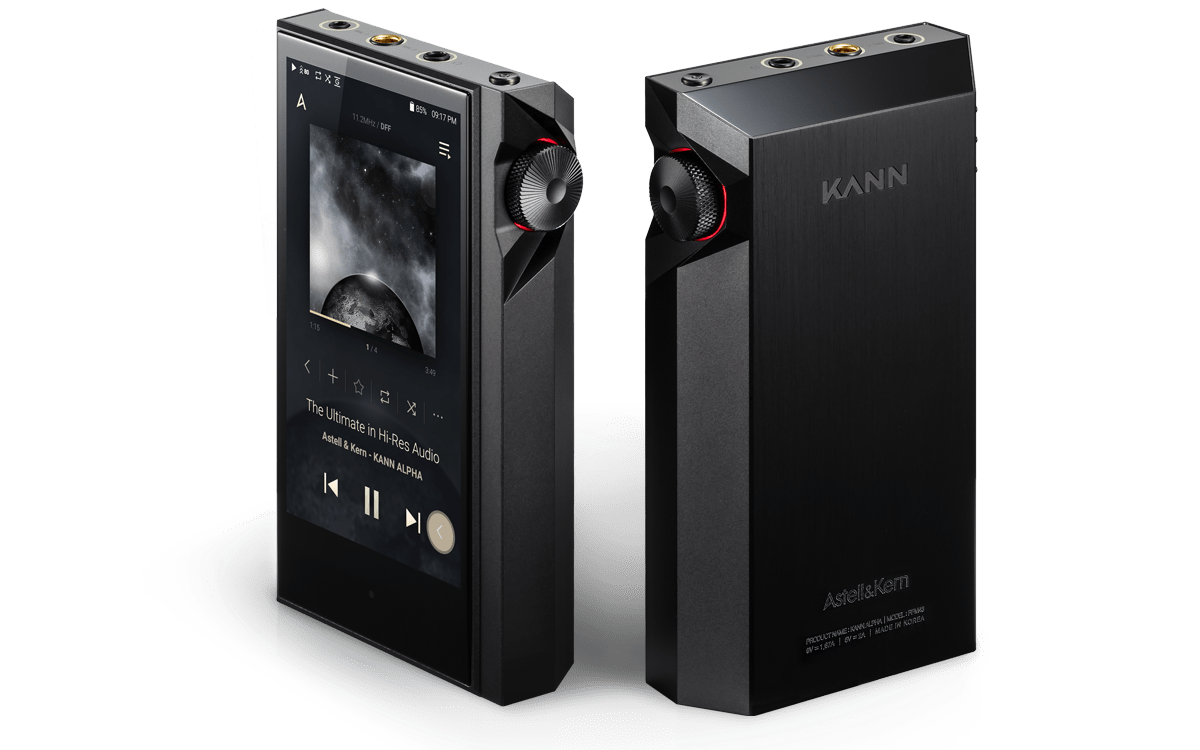 Astell&Kern’s third KANN Performance line high-res audio player, the KANN ALPHA ($1,099), has become available at retail. The KANN series of portable high-resolution audio players are equipped with a built-in headphone amplifier which allows KANN players to drive any headphone, including high-impedance headphones, without the need for a separate amp. Users can select between low-, mid- and high-gain modes to provide the precise output required to drive a particular headphone. Output on KANN ALPHA via the 2.5mm or 4.4mm balanced out is 12Vrms.

KANN ALPHA is the first Astell&Kern player to feature a 4.4mm Pentaconn headphone jack, so users now have more options of headphones and IEMs to pair with KANN ALPHA without worrying about the need for adapters.  In another first for Astell&Kern players, KANN ALPHA features Bluetooth 5.0 compatibility, for faster transmission speed and greater range compared to Bluetooth 4.2, providing a more stable wireless connection.  Both LDAC and aptX HD are supported to provide audiophiles with 24-bit audio playback wirelessly.

KANN ALPHA features complete separation of the 2.5mm and 4.4mm balanced outputs for noise-free audio playback.  When 2.5mm and 4.4mm structures are connected only to the general mute circuit, as is the case with players from other manufacturers, they do not prevent noise interference that may occur because each output signal is not properly blocked.  KANN ALPHA boasts noise-free output because Astell&Kern built an independent structure that blocks interference from outputs by switching off outputs that are not being used, preventing noise from occurring.

With the latest quad-core processor, the user playback experience is fluid throughout navigating menu options and playing back of favorite music tracks.  Other features include a 4.1-inch HD touchscreen, 64GB of internal memory with support for microSD cards up to 1TB, Wi-Fi, DLNA networking, USB digital audio output, USB-C for data transfer and fast-charge support, and the ability to use KANN ALPHA as a USB DAC for a Mac or Windows-based PC.

It further supports native 32bit/384kHz and DSD256 playback and features LED lighting around the volume wheel which displays different colors of light, including red, green, blue, and purple to reflect music playback information including volume range and the bit-rate of the track currently playing. Running a customized version of Android 9.0 optimized for music playback, KANN ALPHA will play for 14-1/2 hours on a single charge.

The player features a redesigned power circuit that provides stable power to the player while suppressing electrical noise.  A newly developed audio circuit design yields a crosstalk measurement of 141dB, which is said by the company to be unmatched by any other portable audio product in its class.

Two ESS ES9068AS DACs are arranged in a dual-mono configuration, providing a wider soundstage and better stereo separation.  MQA hardware rendering is built into the ES9068AS DACs and supports MQA 8x rendering. MQA-CD playback is also supported on KANN ALPHA when playing MQA-CDs using the AK CD-Ripper (available separately), so the listener does not need special equipment to play back master-quality audio CDs.  Sound may be further customized by choosing from a variety of DAC filters provided by the DAC manufacturer.

The aluminum body on the KANN ALPHA provides maximum sound quality, while suppressing noise as much as possible. The use of laser ground extension technology provides the best sound possible, without interference or distortion. In order to minimize contact noise from the output, a gold PVD coating method is applied to the headphone connectors instead of the typical rings used on other manufacturers’ products. This adds an aesthetic contrast to the all-black finish of the player. A special coating is also applied to the top ceramic surface to prevent fingerprints and smudging.