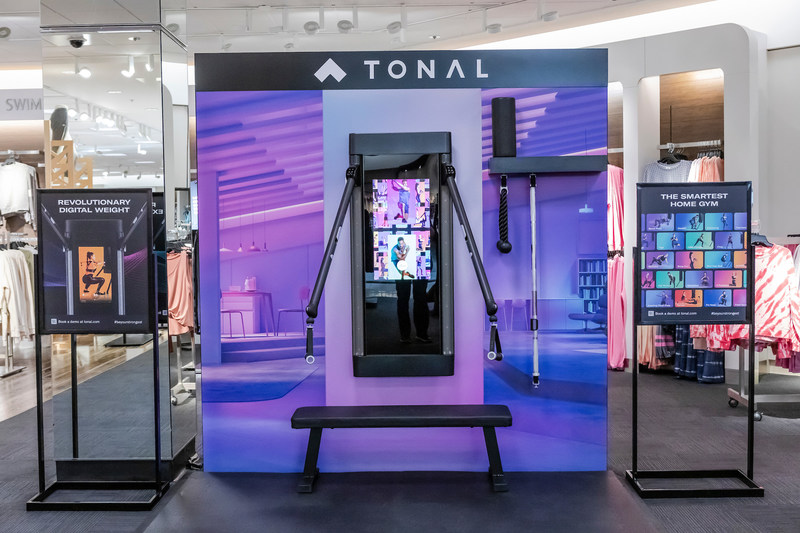 The smart home fitness sensation, Tonal, has made its way into Nordstrom stores. Starting this month, the wall-mounted workout station will have a designated space in the women’s activewear department of 40 Nordstrom locations across the United States. Visitors will have the opportunity to get up-close-and-personal with the equipment and even try out a workout for themselves. By the end of 2021, Tonal could be setup in as many as 60 Nordstrom locations nationwide, more than tripling its in-store footprint in less than a year.

“As we looked to expand our retail footprint and strategy, we looked to the retail landscape, and we really feel like Nordstrom says ‘best-in-class’ — the department store is well-suited to succeed in a COVID and post-COVID world,” Christopher Stadler, Tonal’s CMO, explained to TechCrunch.

As Nordstrom strives to become a “top destination for active gear” according to CNBC, this deal could only be described as a match made in heaven. Christopher Stadler, Tonal’s chief marketing officer, remarks that the average Tonal customer looks a lot like a Nordstrom shopper in terms of age, income, and type of employment. In 2018, the Wall Street Journal reported that Nordstrom patrons are about a decade younger than usual for U.S. department stores with the averaged aged shopper coming in at 43. They also seem to do pretty well financially which is a plus for Tonal seeing as their smart home gym costs $2,995.

“We’re often considered the partner of choice in regards to working with brands, physically and digitally,” Lori Marten, a merchandise manager for Nordstrom’s active category tells CNBC. “So it was a pretty seamless opportunity across the board — one that really helps us build our authority and authenticity in a space that we are aggressively growing.”

In the months to come, that “aggressive growth” will bring with it more fitness and outdoor products like ski goggles, snow helmets, jump ropes, and massaging devices. While mall visits have gone done since the onset of the pandemic, the fitness category has seen outstanding growth, so it looks like Nordstrom may have struck a goldmine with this one.