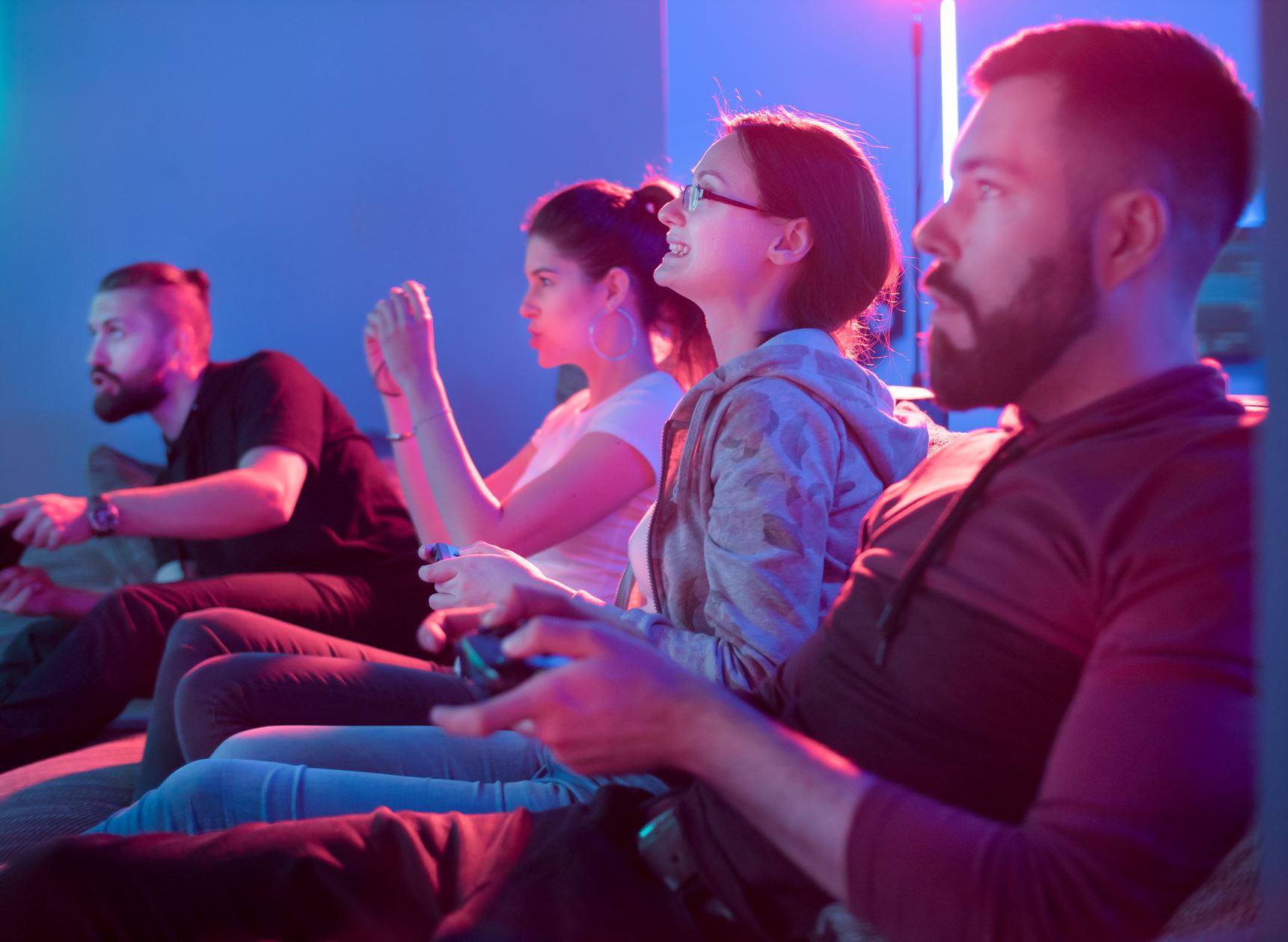 If you think video games are for kids, it’s time to level up your perspective. Research from GWI indicates that gamers are in their mid-30s on average, and they have the income and passion to invest in the hobby. Console gaming is big business, and it’s growing.

When it comes to the newest consoles, it can sometimes seem as though all the opportunity is in the secondary market: Due to supply chain issues, most dealers just haven’t been able to keep any current-gen systems on their shelves, even a year out from their initial release. Whether or not you’ve been able to stock current-generation consoles like the PS5, Xbox Series X|S, or Nintendo Switch OLED Edition, however, there is ample opportunity for dealers to benefit from the gaming boom. Wherever they get their console, gamers are likely to need an all-new setup to use it to its fullest advantage.

What’s Driving the Need to Upgrade

That assertion begs the question: What’s wrong with their old setup? In a lot of ways, current-gen consoles are incremental upgrades – some of them even use the same controller as the previous generation, and Sony and Microsoft are still issuing new game releases on both generations. The people who are lining up to purchase new consoles are doing so to get the advantages of new technical capabilities that have to be supported by every device in the signal chain to work.

Foremost among the new features are the current-generation console visual specs, made possible under the HDMI 2.1 standard. Both the Xbox X|S Series and the PS5 offer support for Variable Refresh Rate (VRR), Quick Frame Transport (QFT), and Auto-Low Latency Mode (ALLM). All these features add up to make games look and perform better. Here’s how:

In order to actually use all these new features, the consoles must be connected to a display with an HDMI 2.1 connection. If the customer is in the market for a new TV, there are additional considerations that can significantly improve the gaming experience.

First up: size. “Buy the biggest screen you can afford” is the common rule of thumb, but there is actual math you can use to help assess a customer’s needs. A screen’s recommended size is based on a number of factors, including resolution, farthest viewer, and task. In the case of gaming, people are making analytical decisions based on what they see on-screen, not just passively viewing like they would a movie or TV show. That means they need a larger screen, closer viewing position, or both. AVIXA, the Audiovisual Integrated Experience Association, offers a free Display Image Size Calculator on their website that can help dealers make the right recommendations.

Gaming consoles offer some of the most impressive ultra-high-resolution content out there. The PS5 and Xbox Series X are both capable of outputting 8K video at 60Hz, so they’re a perfect match for the cream of the display technology industry. The customer’s needs will vary depending on their system, though lower-cost current-generation systems like the XBox Series S and Switch don’t natively output 4K, but they will automatically scale to that resolution.

Because gaming requires users to examine the screen in intense detail for hours at a stretch, the ability to fine-tune settings for viewer comfort is important. Each user must find a balance between producing enough light and contrast to discern every detail without straining their eyes. There’s no magic preset – the right settings depend on the individual and the brightness of the room.

Not all displays allow the user to adjust picture settings in HDR mode; for gaming, make sure any screen you recommend offers the ability to create custom display settings. If a TV will be used for gaming as well as other applications, like watching movies or sports, look for displays that offer the ability to save custom profiles alongside presets for sports and film.

If the customer has a state-of-the-art display and a current-gen console, they can expect to be wowed by stunning visuals and smoother-than-ever gameplay, right? Well, no – not unless they’ve also upgraded the other links in the signal chain. If the customer is planning to connect their new gear with old cables, they’ll be missing out on most of the features they upgraded to get. ALLM, QFT, and VRR all require certified Ultra High-Speed HDMI cables.

When considering 4K to 8K resolutions and current-gen console refresh rates, consumers should also be aware of the length limitations of copper HDMI 2.1 cable runs. HDMI doesn’t specify absolute maximum lengths – that is established during the certification testing of a manufacturers’ actual products – but their own lab testing indicates that Ultra High-Speed HDMI 2.1 copper cable can run up to 16 feet (5 m) while still meeting the spec. Only certified cables will reliably achieve that result. If the customer is planning to position their console any farther from their display, they’ll need an active optical fiber solution to deliver the video signal.

Both Microsoft and Sony have invested a lot of R&D into making gaming an immersive, multi-sensory experience. To that end, they’ve both added three-dimensional audio capabilities to their current-gen consoles. This feature is intended to improve player performance – gamers will be able to hear enemies creeping up behind them and know, based on the object-based audio delivery, in which direction to turn. They must have compatible audio endpoints to deliver this experience, though, and there’s no universal standard for immersive audio.

Microsoft has adopted the popular Dolby Atmos standard for the Xbox X|S, which is available in a wide variety of audio products from various manufacturers, from installed speakers to soundbars to headphones. Sony took a different path. They developed a proprietary 3D Audio engine, Tempest, for the PS5. At launch, Tempest was only fully supported on headphones, and as of now, support on external speakers is still in beta. The upshot is that the right audio setup is going to depend on the customer’s gaming and console preferences.

Serious gamers – especially those who compete online or play massively multiplayer games – may need more than their standard ISP-furnished router as well. Gaming isn’t necessarily a bandwidth hog – it all depends on what’s being played. That said, network latency can be make-or-break in competitive gaming. If a customer is used to relying on an unmanaged network for gaming – or even worse, a Wi-Fi connection – it’s time for an upgrade.

Network latency has the most impact on reflex-based games like First Person Shooters (FPS). For Call of Duty or Fortnite enthusiasts, a ping time that would be perfectly acceptable for video streaming, conferencing, or even other games can put them at a serious competitive disadvantage. 20 ms is a recommended target. That’s a low latency that can’t be reliably achieved with wireless connections, and will only be achieved with a wired connection if the customer has a managed switch with the ability to reserve bandwidth for their gaming system. 30 Mbps per gaming system plus overhead should meet their needs.

About of quarter of the console gaming audience sometimes live-streams their gameplay, which introduces an array of additional considerations. The Xbox X|S and PS5 both allow pushbutton streaming directly from the console, but that basic functionality doesn’t account for some of the activities that are at the heart of livestreaming. In order to sync a livestream with chat and alerts from the streaming platform – and add production effects and scene changes to the stream – the customer will need a capture device.

If the player can’t engage with their audience, thank viewers, answer questions, and follow tips, what’s the point in being live? Using a capture device and a laptop or monitor, streamers can set up a second screen as both a confidence monitor and audience engagement dashboard. There are both dedicated gaming capture devices available, such as the Elgato HD60+, and pro-quality AV capture devices like the Vanco 4K to USB Video Capture device.

Get on the Leaderboard

Gaming isn’t just about the console and the screen. It’s an immersive experience supported by a whole ecosystem of devices. This is a valuable market that requires the very finest technology components to reach its full potential. Even setting aside the consoles themselves, there’s plenty of opportunity for dealers to achieve a massive high score as players upgrade.