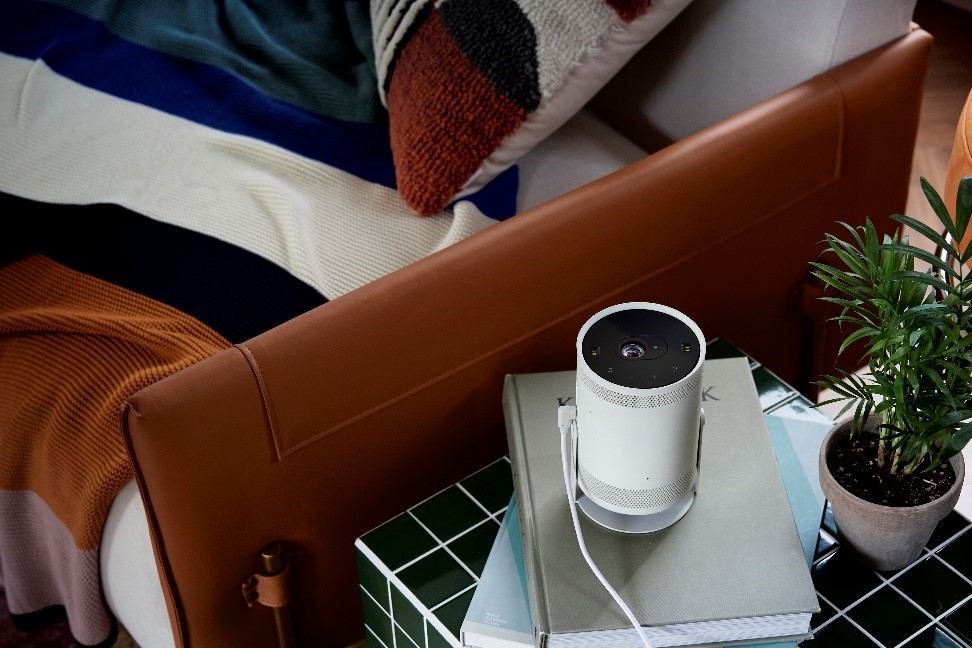 Samsung has already revealed exciting new updates to its TVs at CES, but it has also announced some entirely new products. Case in point: The Samsung Freestyle Projector is a new portable projector model that’s optimized for indoor and outdoor use on just about any surface from any angle.

The device is capable of projecting onto screens ranging from 30 to 100 inches, auto-calibrating to prevent tilt and adjust the images to fit in as little as one second. This is possible because of the Auto Focus and Auto Levelling features that are built into the projector. Samsung’s Smart TV functions are also available on the Freelstyle so that users can stream shows from their favorite platforms from Amazon and Netflix to HBO Max and Disney Plus. But projecting isn’t the only thing users can use this device for. Music can be played as well with the device’s 360-degree sound design, while its field voice control feature lets users change the volume or skip to another song without having to do it with their hands.

Consumers can create audio-visual experiences by attaching the lens cap to create mood lighting so their lighting can sync to their favorite playlist. But that’s not all, this projector can be used as a light source and has accessories that can help it fit into E26 lightbulb sockets. Even if consumers don’t need to use the projector, the Freestyle’s multiple features are useful to meet various needs. The Freestyle has a spotlight-shaped design and is attached to a cradle that grants the device the ability to swivel up to 180 degrees. So anyone can lie down and project images onto their ceiling to view content from whatever angle they find comfortable. This device is portable and weighs less than two lbs so there’s no strain if users want to move the device. Users can watch movies under the stars because the Freestyle projector comes with an outdoor waterproof case and a USB-C portable battery.

The Samsung Freestyle can fit multiple needs for consumers that constantly travel or can serve multiple purposes besides projecting images. It’s available now for pre-order for $899 on Samsung.com.

Netflix Announces It Will Include Ads in New Subscription Tier

Trade Shows are Back — Right?