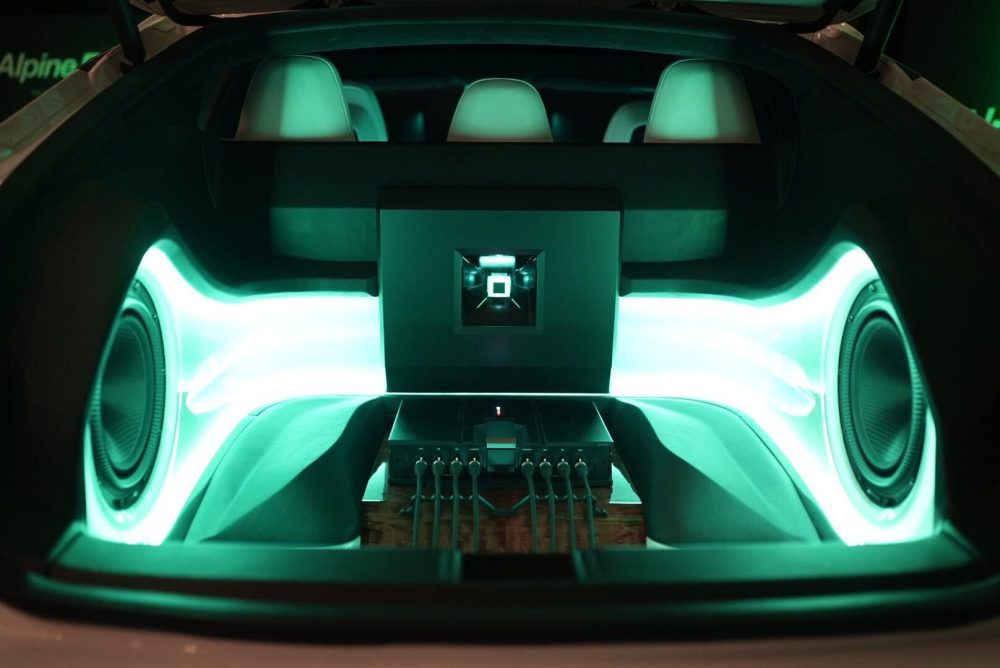 Around 40 people ranging from journalists, authorized dealers, and members of Alpine’s executive management team descended on the MGM Grand in Las Vegas in February to get a look at the first complete vehicle installation of the Alpine F#1 Status System.

The car Alpine chose to demo the audio device, a tricked-out Tesla Model S, was just as sleek as the system itself. And that’s saying something, since the Alpine F#1 Status System is the first of its kind to offer studio-quality 384kHz/32-bit High-Resolution Audio playback.

However, what makes the system unique is not the stand-alone pieces; rather, it’s how all the components synchronize to provide end-to-end integration. This seamless communication allows the third-generation Alpine F#1 Status System to produce 384kHz/32-bit level audio. For comparison, the threshold for hi-res audio is 96kHz/24-bit.

“The amplifier design is a good example. There’s nothing really crazy about the amp that we’re not doing in any of our other amps,” said Alpine Electronics of America Marketing Director Steve Brown in an interview with Dealerscope. “But, it’s the level of detail: the component quality, the design. We can take more of a traditional design and turn it into something special. It’s those kinds of little details – you know, being able to run 384kHz audio through the system – that’s probably the most impressive technical spec.”

The third-generation Alpine F#1 Status System is meant for the hi-fi audio fanatic who is looking to milk every ounce of detail possible from a track. Those looking for a system to hook their phones and stream Spotify tunes into their cars should look elsewhere.

Fully optimizing this sound system requires audio files with the highest sampling rate possible, which subjects the music to little to no adulteration from the studio original. This means running uncompressed pulse code modulation (PCM) files through the system. These files are massive since they contain much of the original details of the studio recording. When transitioned to digital files to be used in most music streaming services such as Spotify or Apple Music, that detail gets lost as the files are compressed into smaller sizes.

“In a system like this, we want all the data. We don’t care how minuscule it is,” said Brown in reference to the quality of audio the system is meant to run. “Instead of prioritizing a small file, we’re prioritizing the biggest file that we can squeeze through this thing. We are figuring out how to process it, and adding the components and the technical ability to process the whole thing.”

Finding large PCM files is rare, considering there is limited demand for them outside of the world of hi-fi audio. However, tracking down these unadulterated files from websites such as HDTracks and ProStudioMasters can be like finding a hidden gem for audio fanatics. With such a high price point, it’s clear that the third-generation Alpine F#1 Status System is being marketed toward those who are looking to extract every detail out of their music.

The dramatic unveiling of the souped-up Tesla came with all the fanfare you would expect from an event held at the MGM Grand in Las Vegas: free drinks, a banquet, and a veiled car just waiting for the curtain to be drawn back. However, in this instance, the quality of the product certainly lived up to the hype. The event featured a 10-minute audio demo for all participants to get a sense of the full range of the system’s capabilities. The demo also juxtaposed tracks of a lower sampling rate with detailed ones meant to be run through the system. The difference was immense.

With the highest-quality audio files, it was possible to hear even minute details such as the echo the palms of your hands make when you clap. However, my favorite part of the demo was when the demo played “Bohemian Rhapsody” by Queen. Each falsetto tone and beat of the drum made it feel as though I was directly in the studio with Freddie Mercury.

Given the intricacies of the third-generation Alpine F#1 Status System, the market for the product, which is set to retail at $35,000, is understandably niche. There are only a select few authorized dealers across the country, and each custom-installed system must be tuned by a member of the Alpine team.

The Alpine team is planning on taking the demo car on a nationwide tour to allow interested custom installers, high-end audio retailers, CE retailers, and potential customers an opportunity to experience the system firsthand. Even if the sound system is way out of your price range, you certainly won’t regret checking it out.