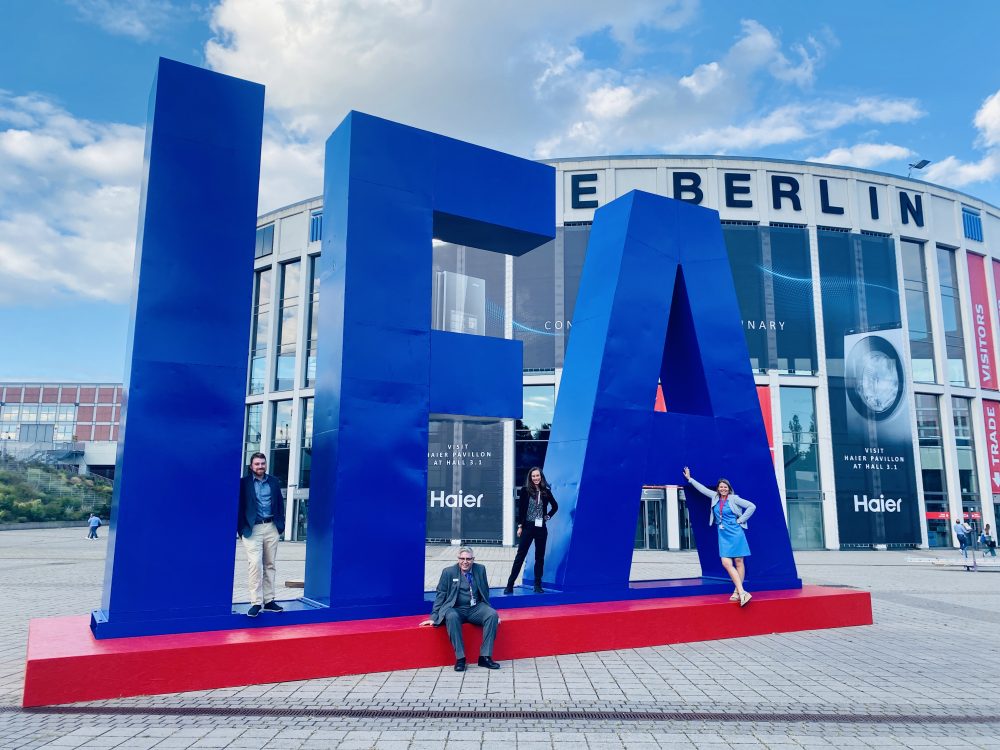 With nearly 30 buildings and multiple levels of exhibits, IFA 2022 might not have been its biggest iteration ever, but it was still housed hundreds of CE products from around the world worth seeing in person. Dealerscope editors canvassed the whole of the show and boiled down some key trends that stood out. While the show was massive enough to have trends in every sector, we found four areas that seemed to stand out in particular:

Getting Around with E-Bikes

Our senior managing editor was on the hunt the whole show for the next best e-scooter, but while there were definitely a few of those, we found many more e-bikes than we expected. According to data released by the LEVA, there were nearly 790,000 electric bike imports in the U.S. in 2021, which is a whooping 70 percent increase from the 463,000 imports in 2020. Put this in perspective with the 652,000 electric cars and hybrids purchased by Americans in the same year, according to Bloomberg.

A study done in Germany by Deloitte this summer found that this increase — which is also happening across Europe — is probably because of both the aesthetic attractiveness of e-bikes, as well as the more reasonable price. This is particularly evident in the U.S., where the price has been driven down by multiple startups.

The bikes shown at the show not only represented what’s coming next but also what trends are drawing in consumers today. Riley’s RB1 and RB2 e-bikes — which are set to come out in 2023 — take the same convenient and easy-to-use technology from their scooters into two lightweight bikes. Then there’s OKAI’s EB100B electric bike that was created for sharing with a friend or partner with a swappable battery, helmet storage, integrated IoT and a frame made of aircraft-grade materials.

That IoT technology is practical in a bike because it can allow the user to easily lock and unlock the bike and have access to GPS, instead of having to dangerously pull out a phone to see a map. Manufacturers like Bosch have taken their e-bike tech a step further with the Bosch Performance CX Smart System, which includes a display, an LED remote and a drive unit. There are helpful features like an Auto mode — coming in 2023 — which will detect the gradients in the road and automatically adjust support on the bike for a smoother ride.

The hottest new wearable might arguably be the most James Bond-esque yet. Consumers are drawn to their subtle and convenient technology, which enables easy music listening, calls and even capturing and sharing photos and videos. Most of these use some kind of bone conduction technology, which is widely available now in sport headphones. However, having eyeglasses with this tech is more suitable for all-day wearing.

They aren’t just for convenience though. Mutrics BG-30 smart glasses are specially designed for video gamers. A combination of open-ear audio, advanced surround sound and anti-blue light lenses are meant to give both the eyes and ear comfort for a little over four hours of play time.

Then there are products like Ampere’s smart sunglasses, which claim to be the first app-enabled electrochromic smart sunglasses. They allow users to adjust the tint in 0.1 seconds with the press of a button on the frame, or the tint can be adjusted in the app as well. This stand-apart feature pairs with the now more common characteristics of smart glasses, like directional speakers and a built-in microphone.

While there was nothing too groundbreaking at the show for smart glasses, there was enough of a presence to indicate that consumers are very interested and are on the lookout for the next big thing. There are already glasses out there for recording and posting social media content, but what might be interesting is when augmented reality (AR) glasses become available for consumer use. Right now, there are some being used in research and industrial applications, but soon it might be possible to lay out Google maps in front of you or play virtual games.

We all know sustainability is huge, and in Europe especially manufacturers are trying to promote eco-friendly practices. This manifested in two main avenues: green lifestyles and greener mobility.

There were almost too many products designed to promote greener lifestyles, and a lot of them were niche and one-of-a-kind. There was BRU, which brews tea at the push of a button without using wasteful capsules or pods. Then there was a tiny company called briiv, which claims to be the world’s most sustainable air purifier and be as powerful as 3,043 medium size houseplants — all with the footprint of one tiny lichen-like potted plant.

And of course, EV chargers were everywhere this year, and this reflects global trends. This is on the heels of recent laws like California’s Advanced Clean Cars II rule, which aims to have sell only zero-emission new cars and light trucks by 2035. Across the European continent, electric cars are on the rise and more public and private chargers are needed.

Manufacturers are addressing this need with products like Qualcomm’s Next-Gen Powerline Device, the QCA7006AQ, which allows vehicles to seamlessly authenticate on the network and coordinate the timing and direction of energy to and from the grid and home. Schneider Electric also has an EV Link Fast Charge Solution designed to charge 80 percent of an EV battery in less than two hours, depending on the model.

Immersive Screens for Work and Play

While some of the smaller Asian companies unfortunately missed out on IFA because of travel restrictions, the main players were there with all of their gaming tech in tow. One of the biggest trends in there were the immersive, often curved screens that could draw the user into the game without dizzying side effects (mostly). LG’s Curved UltraWide QHD Monitor boasts a 34-in. screen, QHD resolution and a refresh rate of 160 HZ. With a 144HZ standard for most gaming monitors, this hits a sweet spot for those looking for top quality products at a reasonable price. Unveiled at the show, the Samsung Odyssey OLED G8 meanwhile is an OLED screen, so there is no backlight, but it still offers true black and RGB. This OLED has a 1800R curvature and a 175Hz refresh rate to stand out from the pack.

While these curved monitors can be used for professionals that need a lot of visual room on their screens, there were also several foldable PCs at the show to offer versatility and convenience. The Asus Zenbook Fold 17 has a desktop mode, which is a 17-in. screen but can fold into a much smaller 13-in. laptop for people on the move. Consumers want ease of use and customization above all else, and this type of innovation caters to that demand.

These are just a handful of the trends that could have been pinpointed at the show. While all this tech has room to innovate, for now it showcases the trend we saw most at IFA 2022: potential.