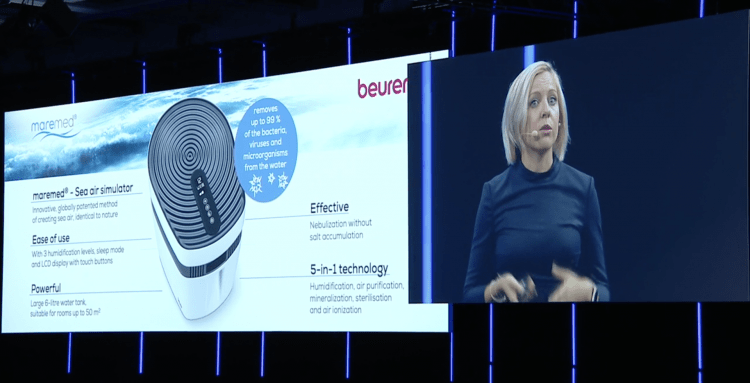 As most asthma and allergy suffers can attest, there are many factors that can lead to an attack such as pollen, dust mites, dry air, and more. Remedies like medication, inhalers, and air purification can certainly help with symptoms, but Europe’s No. 1 health care brand, Beurer, wanted to take things a step further.

During the presentation at IFA 2020 Special Edition, Director Georg Walkenbach admitted that he has suffered from asthma since he was young. One thing that has always helped him feel a sense of relief is spending time by the sea. Between the moisture in the air, the salt, the pureness and the absence of dust mites, the sea has always been an escape for Walkenbach and for many asthma and allergy sufferers alike.

Now, Beurer is bringing that same concept into its latest product: the Maremed Sea Air Simulator.

Katja Bauer, Head of Product Development for Maremed, explained how the device mineralizes, sterilizes, cleanses, ionizes, and humidifies the air in a home through their special sea salt. The reimagined air purification system creates a nature-identical interaction between water, salt, and sun to mimic the sensation of breathing by the sea.

The Maremed works through 7 steps:

The device is simple yet extremely intuitive. The Maremed offers three speed levels and a timer function so that homeowners can personalize the product to their daily activities. In total, the Maremed has the capacity to purify and mineralize the air up to 50 sq. meters.

Beurer has received remarkable feedback from early testers, and they are even in the process of conducting a scientific study on the effects on the Maremed in people with relevant illnesses. The test results can be expected at the end of 2020.

“With Maremed, you can experience a whole new way of air humidification and purification that is visionary, functional, traditional, but also inspiring,” says Bauer.