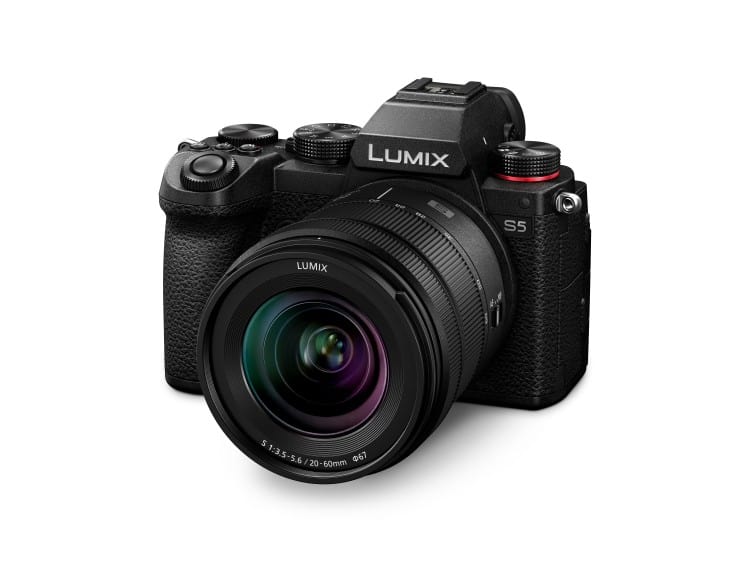 Panasonic has announced for availability in mid-September of the LUMIX S5 hybrid full-frame mirrorless camera.

Among its features is Panasonic’s heat dispersion technology, which enables stable, long-time video recording. The LUMIX S5 also provides 14+ stops of dynamic range, which is as wide as those of cinema cameras, and V-Log / V-Gamut compatibility with popular colorimetry called “VariCam Look.” A variety of recording formats and modes including 4:3 anamorphic mode, Slow & Quick Motion, 4K/60p interval shooting and 4K HDR are also provided.

The LUMIX S5 boasts high-speed, high-precision AF (Auto Focus) in both photo shooting and video recording that are made possible with advanced deep-learning technology featuring real-time detection of the subject’s features, including the subject’s eye, face, head and body.

Combining the Body I.S. (5-axis) in the camera and the O.I.S. (Optical Image Stabilizer, 2-axis) in the LUMIX S Series lens, the 5-axis Dual I.S.2 prevents blurred images with the use of a 6.5-stop slower shutter speed. The camera’s splash/dust-resistant design provides professional photographers with high reliability, says Panasonic.

Thanks to its high energy efficiency and a new 2,200mAh high-capacity battery, the S5 can capture approximately 470 pictures (using the LVF) / 1,500 pictures (in Power Save LVF mode). Power and charging are possible via the USB-C port. Double SD Card slot (UHS-IIx1 and UHS-I x1), 5GHz/2.4GHz Wi-Fi and Bluetooth 4.2 connectivity are also supported.

The LUMIX Series full-frame mirrorless camera system adopts the L-Mount system to provide users with a diverse and future-proof range of products from Panasonic, Leica Camera and Sigma, according to the company.