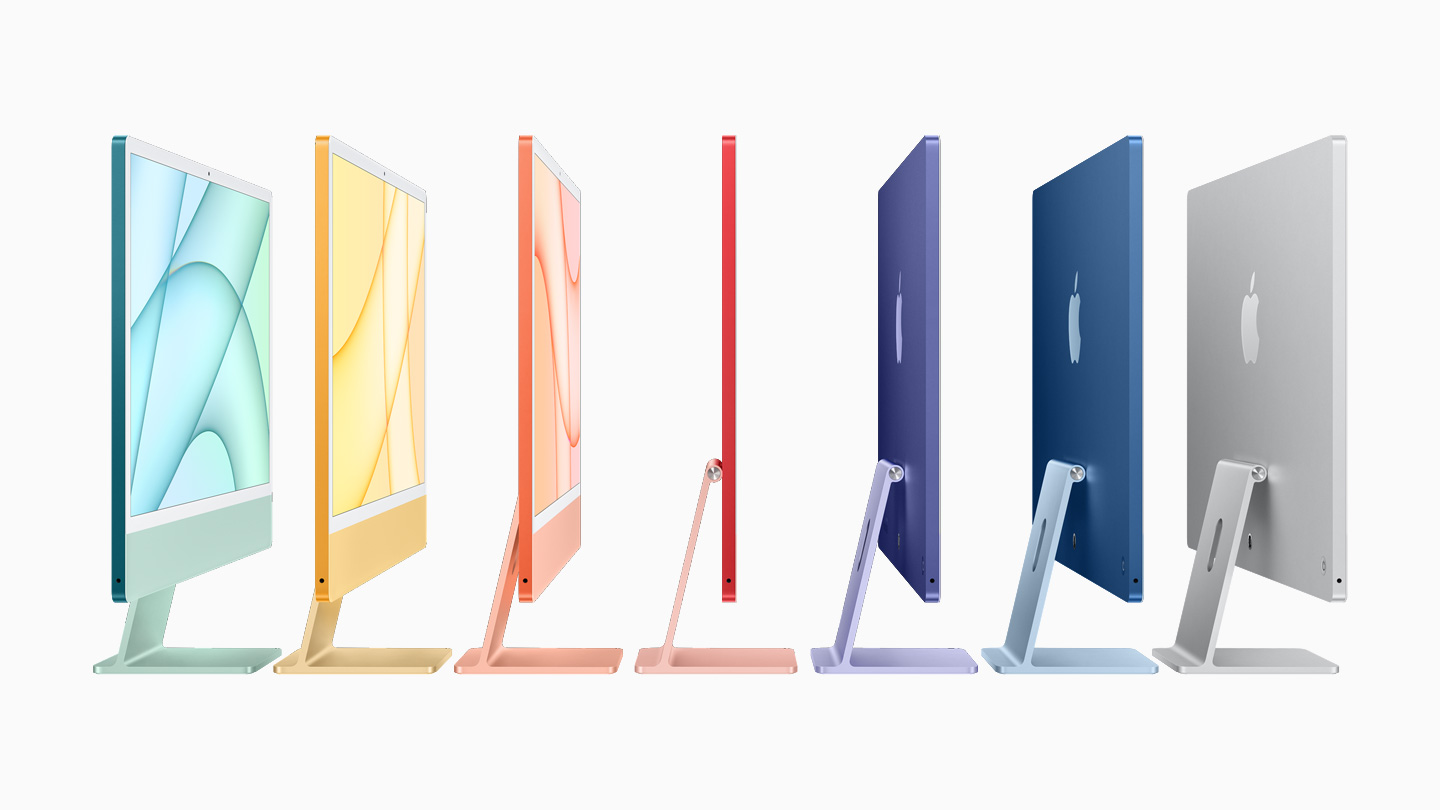 Apple’s Spring Loaded event wrapped up yesterday with a slew of new (albeit, expected) product announcements. Apple went back to its roots with some colorful iMacs and iPhones, came up with its own tracking accessory, gave its iPads and Apple TV a boost, and is testing out some new features with its Podcasts and Apple Cards.

Who could forget that big blue iMac that hit the scene in 1998? It was incredibly clunky but undoubtedly one of Apple’s most iconic products. Now, Apple has introduced a new fleet of colorful iMacs, but unlike the originals, these desktops measure in at just 11.5 millimeters thick. Their 24-inch, 4.5K Retina displays offer an equally vibrant experience with 500 nits of brightness and over a billion colors. They’ve also got the best A/V that’s ever been seen in a Mac with a 1080p FaceTime HD camera, studio-quality mics, and a six-speaker sound system. The power and efficiency of the M1 chip combined with macOS Big Sur launches apps at remarkable speeds, and makes transitioning from one project to another a seamless experience. The new iMacs range in price from $1,299 to $1,499.

Apple also expanded the color palette for the iPhone 12 and 12 mini with the addition of a new purple finish. Apple says the new color “beautifully accentuates the flat aluminum edges of iPhone 12, which are perfectly color-matched to the precision-milled back glass.”

The M1 chip was a common thread tying together some of Apple’s latest announcements. Its presence in the new iPad Pros have made them Apple’s most powerful and advanced iPads yet. Along with 5G connectivity, users can enjoy high-quality video streaming, real-time collaboration, and HD FaceTime calls while on the go. The 12.9-inch iPad Pro features a refreshed, Liquid Retina XDR display for more “true-to-life” details. Record-breaking speed is seen in the Thunderbolt and USB 4 support, making the USB-C port on the iPad Pro the fastest and most versatile on an iPad.

Apple announced an upgrade to its 4K TV that was released in 2017. This time around, Apple TV 4K is powered by the infamous A12 Bionic chip, which offers a boost in graphics, performance, video decoding, and audio processing. While the box itself stayed true to its original, squircle-shaped design, the remote received quite a refresh. The Siri Remote has a more intuitive clickpad with five-way navigation, and touch-control for directional swipes.

Apple’s Find My network has probably saved year’s worth of time spent looking for misplaced devices. Now, its latest product can help find practically anything. AirTags can be attached to keys, backpacks, suitcases, and more. The AirTags can be named based on the items they are attached to, and can be located within the FindMy app, even when out of Bluetooth range. Apple says the AirTags keep location data private and secure, and the owner of the AirTag is the only one with access to its location.

On the non-physical product side of announcements, Apple announced Podcast Subscriptions and Family Cards. Apple’s Podcast Subscriptions will be available starting in May, and come with a variety of benefits for paying customers like ad-free listening, bonus content, and early access to new episodes. Many platforms are switching to this model for its dual monetary benefits for creators and service providers.

Speaking of finances, Apple has introduced Apple Card Family, a new way for families to share their Apple Card, track purchases, manage spending, and build credit together. Up to five people can be added to an Apple Card account within the Wallet app. Users must be 13 years of age or older and owners must be at least 18. Apple Card Family allows parents and guardians to teach children about money, help them build credit, and provide daily spending allowances that foster good money management skills.