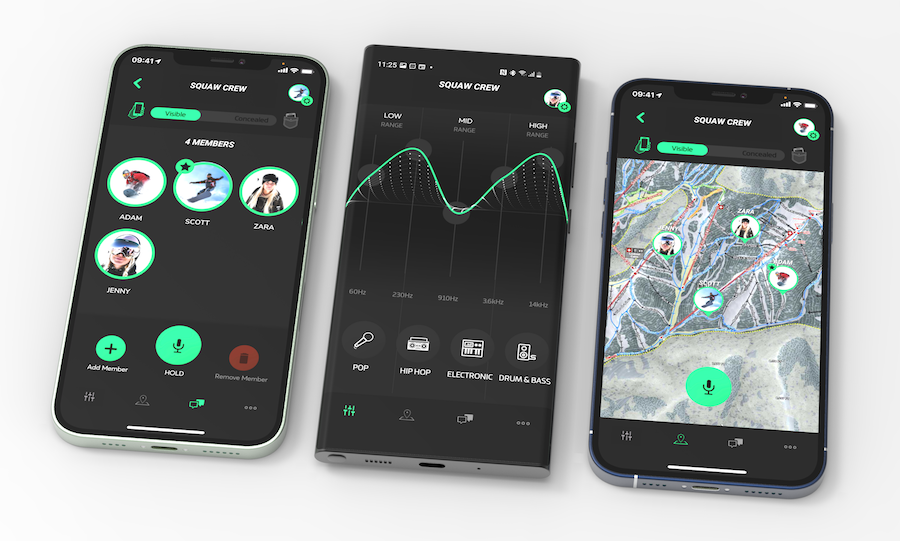 Want to stay connected with your friends and family on the mountain without the hassle of digging your phone out of its waterproof case? The Aleck 006, an insertable wireless audio and communication device that fits into the ear slots of any audio-ready skiing or snowboarding helmet, is designed just for this purpose, to give you peace on the mountain while still keeping you connected with the people out there with you.

The Aleck 006 works through a push-to-talk mechanism that’s easily usable with gloves on, and functions as a built-in headset, allowing you to take your music onto the mountain. Mountains are not known for their great cellular reception. So to combat this challenge, the Aleck 006 only requires minimum cell service of 3G to function, and features an all-day battery life so that you don’t need to take a break from the mountain to charge it. Aleck 006’s comm systems operate using a military-grade AES-256-bit encryption, which is sure to keep your mountain communication secure from any potential eavesdropping yetis.

You can also optimize the device by pairing it with the Aleck GO! mobile app, which is free for download to an iOS or Android device. Through the app, users can create groups, establish group message chains, and view everyone in their groups’ up-to-date location on detailed resort maps. Via the mobile app, users can also adjust the equalization and the volume of different sound frequencies in the audio to produce clear sound and communication. Aleck just announced a partnership with MapSynergy to create a SkiMap function on its digital app. The SkiMap gives users access to more than 390 advanced ski resort maps from across North America. These digital maps replicate paper maps and include points of interest such as first aid stations, restrooms, restaurants, and transportation, along with terrain features including topo lines, tree glades, terrain parks, gates, and more. Combined with the Aleck 006’s GPS function, users can see precisely where everyone in the group is on the mountain in real time.

The device was developed out of an idea that struck Aleck co-founder and CEO Stephen Catterson during a chairlift ride in 2014 while he was thinking about how frustrating it was to not be able to listen to music and easily communicate with friends on the mountain. From there, Stephen experimented with comm-enabled helmets,  before conjuring up the idea to sell the wireless systems on their own. Although the Aleck 006’s first year on the market was just in 2020, it has been gaining in popularity. To boot, it just won a prestigious 2021 ISPO award in the Snowsports Equipment category.

It’s the perfect high-tech companion for winter sports and is currently available both directly from Aleck and at REI outlets — no consumer electronics retailers just yet — across North America, and sells for $130.