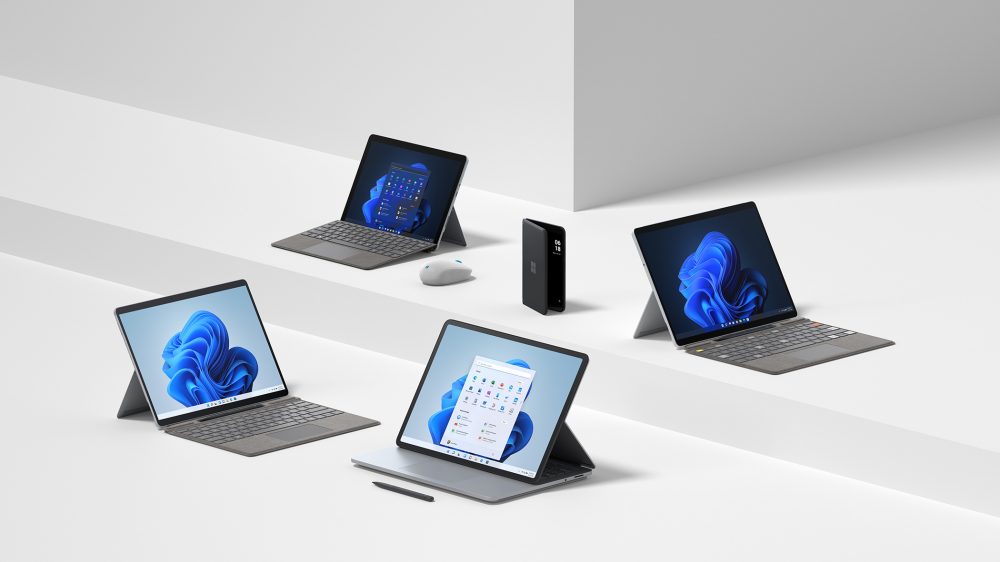 During an online event yesterday, Microsoft unveiled the latest generation of Surface tablets, laptops, and accessories. The company’s EVP & Chief Product Officer, Panos Panay, introduced eight new devices, all of which will be released in October, and they look promising. The list of Microsoft Surface products that were shown at the event includes the Microsoft Ocean Plastic Mouse ($24.99), the Surface Laptop Studio ($1,599.99), the Surface Go 3 ($399.99), the Surface Duo 2 ($1,499.99), the Surface Pro 8 ($1,099.99), and the Surface Slim Pen 2 ($129.99).

Microsoft also made it a goal to be inclusive with its product design, thanks to a new kit that helps people with disabilities more easily use any of the Surface devices. The Surface Adaptive Kit, which is due out later this year, contains raised stickers, port labels, a lanyard tab, and keycaps to help people with vision impairment distinguish the different keys on their keyboard.

Microsoft introduced the second-generation, Android-based Surface Duo 2 mobile device, which unfolds into two screens that can run different apps simultaneously, as well as nano-coated 3D glass to give onscreen colors more definition, an 8.3-inch display, and a glance bar on the side that displays notifications. It works with the new Slim Pen 2 and has a pen cover that secures the pen to the back of the phone. This mobile device also has a camera with ultra-wide-angle capability and gives an instant preview of photos for you to see if you got the perfect shot on the fly. The Surface Duo 2 is compatible with LTE and 5G networks and syncs up seamlessly with other Surface devices, too, letting you easily transfer and access content between devices and pick up where you left off. Even phone apps can be viewed on Surface laptops and pinned to the taskbar, letting you copy and paste content from the Surface Duo 2 directly into other apps on Windows 11.

The Surface Pro 8 convertible tablet is an upgrade in performance from the Surface Pro 7. The Pro 8 has 16 hours of battery life, a larger 13-inch screen (vs 12.3-inches), Dolby Atmos for sound, Dolby Vision for the picture quality, and a 10-megapixel rear camera. This device can have up to 32 GB of RAM, beating out the Pro 7’s max of 16GB. At less than two pounds, the Pro 8 keeps remains a cinch for bringing along anywhere. Processors come with active cooling technology, so the device doesn’t get too hot. In addition to being compatible with the new Surface Pro Signature Keyboard and Slim Pen 2, the Pro 8 is now equipped with Windows Hello 2, for more secure user authentication.

The standout new product, in my view, was the Surface Laptop Studio. Panay said this model is the most powerful Surface created so far, which is why “Studio” was added to the name to differentiate it from previous Surface Laptop models.  This device combines the power of a desktop and the flexibility of a laptop. Switch your workspace to studio mode by simply pulling the screen towards you over the keyboard, transforming the laptop into a tablet. If you are creative and want to render animations, edit videos, or draw, you’ll find the Surface Laptop Studio to be a great fit thanks to its 11th generation Intel Core H Series processors, NVIDIA Ampere graphics architecture, and a cutting-edge gaming-ready GPU. It also has a 14.4-inch screen display, with built-in Slim Pen storage and charging. The Slim Pen can be used to draw on screen or edit videos in Adobe Premiere Pro. This laptop also has up to 2TB SSD and 32GB RAM. RAM and up to 2TB SSD With up to 32GB RAM and up to 2TB SSD

Now, a bit about the Surface Slim Pen 2, which is a great accessory for creators who work digitally. When the Slim Pen 2 is in use, a customizable pen menu pops up to shorten users’ navigation time. TheSlim Pen has a G6 processor, which helps deliver more realistic and nuanced haptic feedback vibrations to mimic the feel of writing on paper, not to mention more accuracy. The pen charges wirelessly when attached magnetically to the Surface Laptop Keyboard, the Surface Laptop Studio, and the Surface Duo 2.

The Surface Go 3 is a portable touchscreen that can be used for homework, work, and play. This device is great for families because parents can monitor and set up safety parameters for their child’s device. Parents can view their child’s screen time and dictate when they have spent enough time on their device. The Surface Go 3 has a 10.5-inch display, Dolby Audio, a 1080p HD camera, and up to 11 hours of battery life.

In addition to being compatible with the new Surface Slim Pen 2, all the new laptops and Surface Duo 2 are capable of running more than 100 Xbox games on the cloud via Xbox Game Pass Ultimate with the Xbox wireless controller, so gamers can play Call of Duty or Minecraft without having to lug their console around. Even if you misplace your Xbox controller, you’re set because you can use the touch controls on your device instead.

Microsoft also mentioned how the company is committed to becoming zero waste by 2030. It has started to create eco-friendly products such as the Microsoft Ocean Plastic Mouse, which is made out of plastic found in the ocean that has been recycled. It can also be sent back to Microsoft  to be recycled through a mail-back program. All of the new devices will ship with Windows 11 in October.