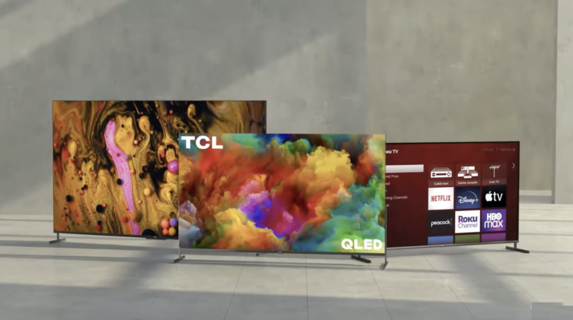 TCL announced during its pre-CES opening press event a sweeping range of TV, audio, mobile phone, computer, and home comfort products.  Highlights among its newest new TV offerings are numerous models that TCL North America Senior Vice President Chris Larson characterized as representing TCL’s “OS-agnostic approach” to designing for the market, enabling users to “make a choice of how to engage with their TVs and with their content.”

The company is upgrading its entire lineup of TVs with Roku and Google TV in 2022, according to the press announcement, and is emphasizing streaming and gaming solutions among its TV feature set to answer needs that ballooned during the stay-at-home consumer behaviors over the past nearly two years.

Aaron Dew, senior director of product development, noted in the presentation that 60-inch-and-over TV sales accounted for 25 percent of all TVs sold in 2021 in North America, all told, with big-screen sales ticking up 40 percent over the prior year’s sales.

Looking to meet and respond to that trend head-on, TCL says it is offering for availability now the largest model in its ultra-large-screen XL Collection – a 98-inch QLED-powered TV — at under $8,000. And it is bolstering its support of mini-LED backlight technology, models of which it introduced to North America three years ago, with a third-generation 85-inch flagship 8K QLED set, the Model X925pro, featuring OD Zero mini-LED backlight technology, which measures under 10mm thin.

Dew also revealed that the company has partnered with Pixelworks to deploy a new “motion ecosystem” called TrueCut Motion within its high-performance TVs next year. As described by the company, it is an end-to-end solution that compensates for video motion standards that are not aligned with film motion standards. It includes a new content delivery format along with a concurrent device certification program that is aimed at producing a “consistent, filmmaker-approved output.”

Video gamers’ needs are not being ignored by TCL in 2022, by any measure. The company is souping up panel refresh rates in some models from 120Hz to 144Hz, to produce what Dew says is a “faster game feel.”

In audio, the emphasis was on soundbar introductions, due out before the 2022 holiday selling season. These will include two new Alto 7 models in 3.1- and 5.1-channel iterations, both offering Master Sound Calibration to enable users to tweak the sound to fit the space around the TVs, and two new Alto 9-Series models providing 5.1.2- and 7.1.4-channel audio performance as well as compatibility with premium sound enhancement technologies such as Dolby Atmos.

In summation, Larson added, “We will continue to evolve to the shifting needs of our users.”