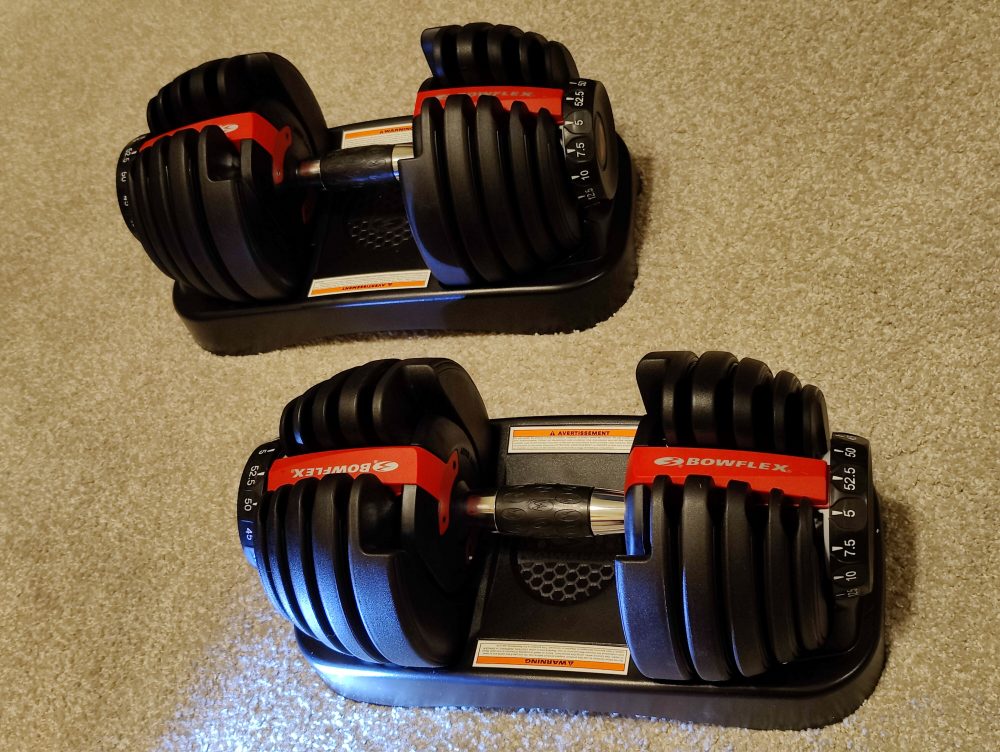 Whether it’s due to a genuine fitness craze or primarily a gym-avoidance craze, sales of home fitness products continue their upward trend. And carried along with that trend are intelligent apps and gear aimed at the home gym. Even dumbbells are getting smarter. Bowflex’s established SelectTech system is emblematic of the trend. Improved health notwithstanding, the Bowflex SelectTech 552 Dumbbells, for example, offer several benefits over traditional free weights.

A pair of the Bowflex SelectTech 552 hand weights costs $399 and can be adjusted from just five pounds each to 52.5 pounds each. That’s plenty of range for most of us. The lower weights are ideal for repairing a muscle tear or doing some rotator cuff strengthening, while the higher weights can be used by more experienced lifters to do bench presses and preacher curls.
To select different weights, each dumbbell has a dial on each end. This, in turn, determines how many discs get locked onto the hand weight. And with all the selections, it’s the equivalent of getting a set of 30 individual free weights in just two dumbbells. In testing, we found them also safer to use. A home vertical rack of traditional dumbbells can be awkward to manage, and it’s easy to drop or misalign a heavy weight in the rack (watch your fingers!). The Bowflex weights, by comparison, are simple and easy to store without needing a rack or cramped positioning.
Most of our shoulder and arm strength routines were easily accommodated by the SelectTech weights. It takes just a second or two to spin dials and change the weights for rapid supersets, for example. And you can’t mismatch or dangerously imbalance them by, say, selecting 25 pounds on one end and 40 pounds on the other end of a hand weight; they won’t let you lift them out of the stands if you do that. Nice safety feature.

But the real smarts of the SelectTech system — like so many other fitness devices today — are really in its supporting custom apps. Designed to be used in conjunction with its weights, stationary bikes, and treadmills, Bowflex’s JRNY app for phones and tablets is $19.99 a month or $149 for the year for the software with video training sessions. Each is geared toward your level of fitness and particular goals (weight loss, improved strength, etc.) with tailored workouts to help keep you motivated and progressing. The video includes weight training sessions, as well as cardio classes for those with the very popular Bowflex C6 Bike ($999) or Bowflex Treadmill 10 ($1,999). And if you get bored with trim trainers urging you on, you can switch to streaming Netflix, Hulu, or Amazon Prime Video while your individualized progress data continues along the bottom of the screen.

Nonetheless, we still found the best feature of the Bowflex SelectTech 552 was the overall compactness of the free weight set compared to a large rack of traditional weights. It makes the SelectTech 552 perfect for cliff-dwellers, or those in smaller homes who don’t have the space for a dedicated workout room. If you do have a bit of extra space, there’s also a $179 SelectTech Dumbbell Stand with Media Rack, where you can also set a tablet for some of those streaming training sessions. All in all, for the equivalent of a few months’ gym membership, it’s a permanent solution on how to avoid going to the gym.