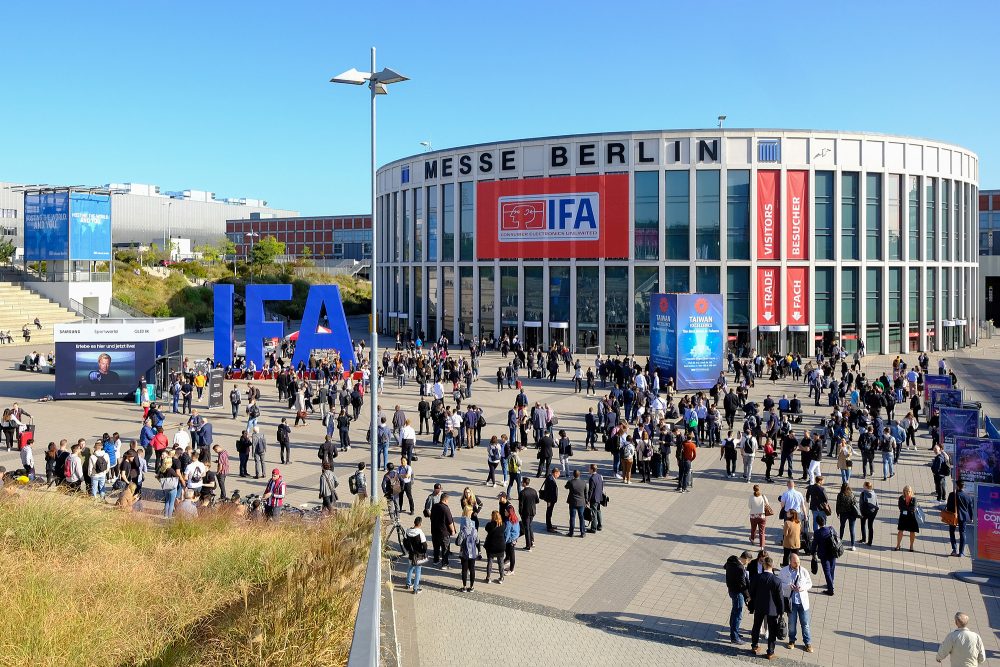 IFA, the annual event in Berlin that is the largest electronics trade show in Europe, took place in scaled-down virtual form in 2020 and was canceled altogether, due to the Delta variant, in 2021. But this September, IFA will return in its usual form as IFA 2022.

That’s according to Jens Heithecker, Executive Vice President of Messe Berlin Group and IFA Executive Director, in a digital press conference that took place on the morning of April 27.

“IFA 2022 is going ahead- full size, real life, as a hands-on on-location event without compromise,” Heithecker said in the press conference. The event will take place September 2-6 at the Messe Berlin Exhibition Grounds in Berlin.

“For both exhibitors and visitors, the risk of a sudden new lockdown was simply too big,” he said of the 2021 cancellation. “But now, it’s 2022, and the situation has changed significantly. I’m certain we all feel the same- it’s been a tough two and a half years, for everyone. Our world has suffered. We have seen illness and death, economic uncertainty, lost livelihoods, endless lockdowns.”

Now, however, “it’s time to reconnect, interact, collaborate, and co-innovate. To rekindle friendships and partnerships, to meet people face to face, not as flat images on the screen. It is time for a return to normal-though let’s be clear, it’s not the normal of 2019.”

All major COVID-19 restrictions have been lifted in Germany. Heithecker said that 15 of the top 20 exhibitors, thus far, have agreed to return to this year’s show, “nearly all of them at the same scale as 2019.” He also reported “really strong bookings across the board” for booths.

Heithecker is confident that the show can go ahead as normal, citing the lack of restrictions in Germany and that at least one major event has taken place at Messe Berlin in recent weeks without incident or restrictions.

“IFA is a key platform for our industry,” Heithecker added. “It’s where they can reconnect with friends. It’s where they can be reassured that products were flowing. And that’s why retailers tell me, they expect every single brand and manufacturer that they work with to be here in Berlin.”

Heithecker also said that “all the big retail groups” have confirmed that they will attend IFA in Berlin.

IFA also announced that Christiano Amon, the Qualcomm president and CEO, will deliver the opening keynote at the event.

“I’m looking forward to sharing how Qualcomm is driving the pace of innovation for 5G and AI across devices and experiences,” Amon said in a brief pre-taped message in the press conference.

More keynotes will be announced “in due course,” Heithecker said.

Heithecker also discussed the effect that the pandemic had on the industry since 2020.

“The pandemic created a boom for technology products,” he said, adding that “technology literally saved lives” and that “it helped us keep our sanity and wellness in difficult times.” He was adamant, as well, that while virtual meetings have been a help, it’s not the same as meeting and seeing products in person.

IFA will have an “extensive virtual program,” for those not able to travel to Berlin.

“We have learned what works and what doesn’t work when it comes to virtual events,” he said, adding that there weren’t be a “full online replication” of all products, but that press conference and keynotes will be included. Heithecker also stated that it won’t be a full metaverse experience.

“Virtual experiences are only complementing real life, they’re not replacing it,” Heithecker said. “And that’s why there’s simply nothing that compares to the real experience, being at a trade show, coming to IFA Berlin, walking the halls and the fulcrum at Messe Berlin, and experience the future today.”

Heithecker added that topics that will be covered at IFA in September will include AI, 5G, Internet of Things, robotics, digital health, and immersive experiences. Challenges related to the supply chain are likely to also come up as a topic at the event.

Also delivering a message was Paul Gray of Omdia, who enumerated some overall industry changes. This included a “shift towards providing better support for gaming,” a shift from gaming consoles towards online, continuing growth of home cinema, the continuing shift to OLED TVs and Samsung’s new QD-OLED format, and the entry by new players, including Amazon, to the TV market.

GFK’s Norbert Herzog also shared some trends, including a rise in the cost of logistics, the new Omicron surge in China affecting supply chains, and complications arising from the Russian invasion of Ukraine.

Later in the day, Heithecker and Dirk Koslowski, the IFA director, participated in a Q&A session with North American media.

“There’s a huge demand by retailers,” he added. “Whenever we spoke to retailers in the last couple of weeks, they ask us to help to bring the boom of new product, of innovation… to the consumers, to the markets, this holiday season.”

Koslowski said that exhibitors have to “figure out how their booth will look like,” while some might not have enough new products ready to show, due to chip and other shortages. “That’s a huge challenge, for all of our clients in general.”

The IFA executives shared that they do not plan, at the moment, to have COVID restrictions in place for the event, as the recent Messe Berlin events have not had mask requirements. Some, however, will face restrictions on their own end when traveling from other countries.

“Safety is our priority,” Heithecker said. “It’s our priority for our exhibitors, for our attendees, for visitors, and for ourselves.”

Koslowski added that the venues are very large at Messe Berlin.

Heithecker, in response to another question, stated that while very few Russian exhibitors took part in IFA in the past, the organization will comply with German sanctions, and forbid participation from both Russia and Belarus, barring some change in the imposed sanctions.

Heithecker did not give an outright number of how many exhibitors or participants will participate in the event, although he said that those numbers are not typically shared months prior to the show.

And in response to a question from Dealerscope about the day-to-day experience for a virtual version of IFA, Heithecker responded that “nothing can replace the face-to-face meeting.” That’s because, in part, IFA does not believe that virtual attendees will spend as much time on the platform as they would if attending in person.

The specific platform that will be used for the online version of IFA was also not specified, but more details will emerge in the coming weeks. From the sound of everything so far, the show seems to be gearing up to be better as an in-person event rather than a virtual event, but by September, that’s also likely what most attendees will want anyway.