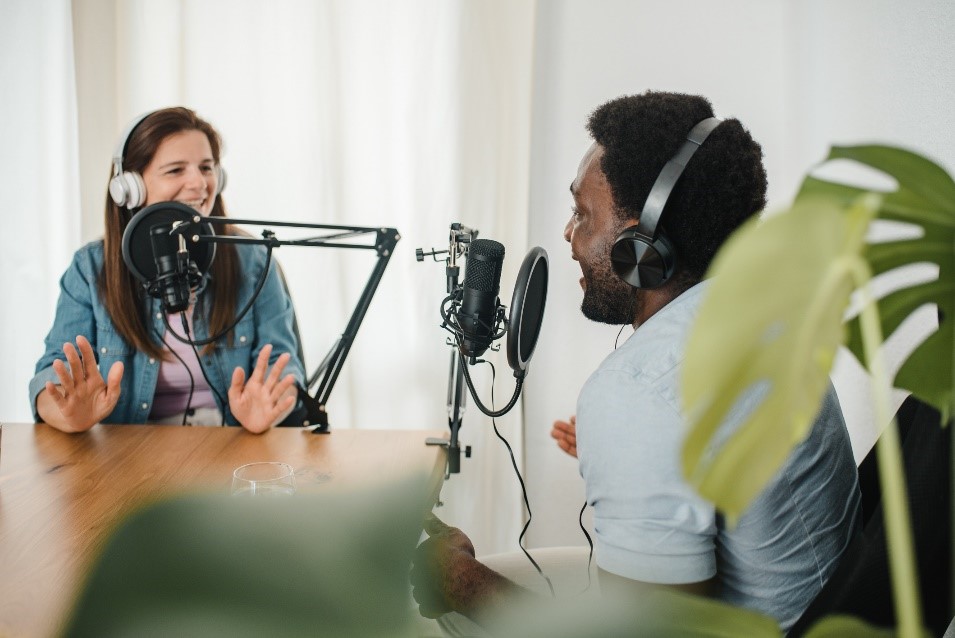 First, we had the radio, then podcasts, and now we have social audio. The latest evolution of audio broadcast content allows for multiple people to have discussions with people all over the world through voice-only platforms and apps. It started with Clubhouse, which experienced fast and high growth during the pandemic, but since then, multiple media companies such as  Spotify, Twitter, and Facebook, have joined in on the rise of social audio and created Spotify Green Room, Twitter Spaces, and Facebook Live Audio Rooms. In March 2021, the Clubhouse app had received 13 million downloads and allows up to 8,000 people in a chat room which puts it far ahead of its competitors. Facebook Live Audio Rooms has a limit of 50 participants, Twitter Spaces allows up to 13 people, and Spotify Greenroom allows up to 1,000 people to join a session and has 110,000 active users.  At a panel earlier this year at CES, “The Future Sounds Amazing: Betting On Social Audio,” the discussion focused on the rise of social audio: What exactly constitutes social audio and what makes it so appealing.

The panel was hosted by Kristin Meyers, the senior executive of Audio at the United Talent Agency (UTA), and she was joined by two panelists, Audio Collective Co-Founder Toni Thai Sterrett and Clubhouse Head of Community and Creators Stephanie Simon. Starting off the panel, Simon took the time to explain that her company, Clubhouse, is an audio-based, interactive social media platform and app where people can discuss or listen to topics that interest them.

Instead of just listening as one would do with a podcast, Clubhouse users can join in on the conversation. “Voice is the oldest medium, so it was a natural process that expanded into the social network,” Simon said.

Chiming in, Sterrett described her first experience using Clubhouse: “I just entered a game room with all these people, then all of a sudden I was talking to like-minded people about life, travel, and other things from all over the world,” she said.

No doubt, there is a lot of potential for social audio to be used in different ways other than discussions. There’s a program called “Clubs” on the Clubhouse app that allows communities to come together and host different programs. For example, there’s a lullaby club where different musicians sing to people to sleep. This is a smart way for people to market their musical talents if they are trying to reach more people or attract attention from a music label. “It’s not just a place to talk, it’s a place to experiment and create together” Sterrett explained. Any user can create a club, but it is only open to the people that they follow back. This way users can control the people that are admitted into the clubs they make. Retailers could create clubs on specific subjects they would like to talk about with their consumers. If a CE retailer is selling cameras, for example, they could hold a club for photographers and hear what features they love about certain cameras and what cameras they use on their projects. One person could mention how they like using smaller cameras for nature photography while someone else could say they want smaller cameras for their indoor studio. CE retailers can also give consumers advice on how to best utilize certain products or what products are best for their customers.

Everyone Will Be Heard

Social audio can be used as a way for people to get advice or see certain situations from multiple points of view. This also gives power to people whose opinions are often overlooked because they have a platform where people are willing to listen. Retailers can use this to their advantage because they can get direct feedback from consumers or allow consumers to ask retailers questions about certain products. Simon mentioned that, in her clubs, she makes sure that women are not cut off or belittled when they are speaking. (As a woman myself, I appreciated this fact because I have experienced being interrupted while trying to speak my mind, and how unimportant it made me feel. Just having one person who is willing to listen, even on social media, is a comforting factor for me.)  Sterrett also spoke about how she uses the Clubhouse app to hear more female and diverse voices in the male-dominated film industry. Other male-dominated markets like the gaming industry could benefit from listening to its female audiences because they are still customers with demands for certain products. I have a few friends that are gamers and they have complained about the size of controllers being too big for their hands and it affects their gameplay. Also, a few girls have complained about gaming accessories for girls mainly coming in the color pink, and not every girl likes pink. If gaming companies had a social audio session with its female audience they would be able to get more feedback on what colors they want and how to improve their products to be more female-friendly.

When asked by Meyers who she thought thrived on social audio platforms, Sterrett replied: “Someone who knows how to listen [because] listening requires a great deal of empathy. Paul, the founder, always said that you can hear people’s hearts.”

The Future of Social Audio

Meyers moved on to talk about how people speculate that the popularity of social audio will decline once the pandemic has ended and people start physically socializing again, raising the question of how social audio fits into the greater social network landscape.

Per Sterrett, social audio isn’t limited to discussions only, and experimenting with the medium can bring new possibilities. As an example, she cited Clubhouse’s recent collaboration with Warner Media and SXSW 2021, whereby fans on the app had the opportunity to talk to actors and writers about the show. CE Retailers could have collaboration opportunities as well where they can host a “Club” where consumers can have the chance to ask them questions about their products. For example, if a consumer wanted to know about a company’s new sustainability efforts, the company can host a session and go into detail about how its recycling process works. But that’s not the only use social audio could have, it could be used for feedback that could help companies improve its products. If a headphone brand that’s specific to runners held a social audio session, the runners could give feedback on what problems they run into while using the device or what they want to be added to the product to satisfy their needs. Even if all their demands can’t be met, the retailer can give a detailed explanation as to why certain things would not be able to be added to their product.

“You can tweet and cross your fingers and hope that person will respond to your tweet, but now [with social audio] that person can interact with the actor and ask their burning questions,” Sterrett said. “Scripted content could be used on social audio as well as table reads.” An event like this will surely grab users’ attention because who wouldn’t want the chance to talk to their favorite actor? While social audio is fairly new to social media, it does have the potential to change depending on how much people are willing to experiment with audio. “If you have a voice, the social audio space can be used in any way the user chooses to use it,” said Sterrett at the end of the panel. “The only limit is your imagination.”