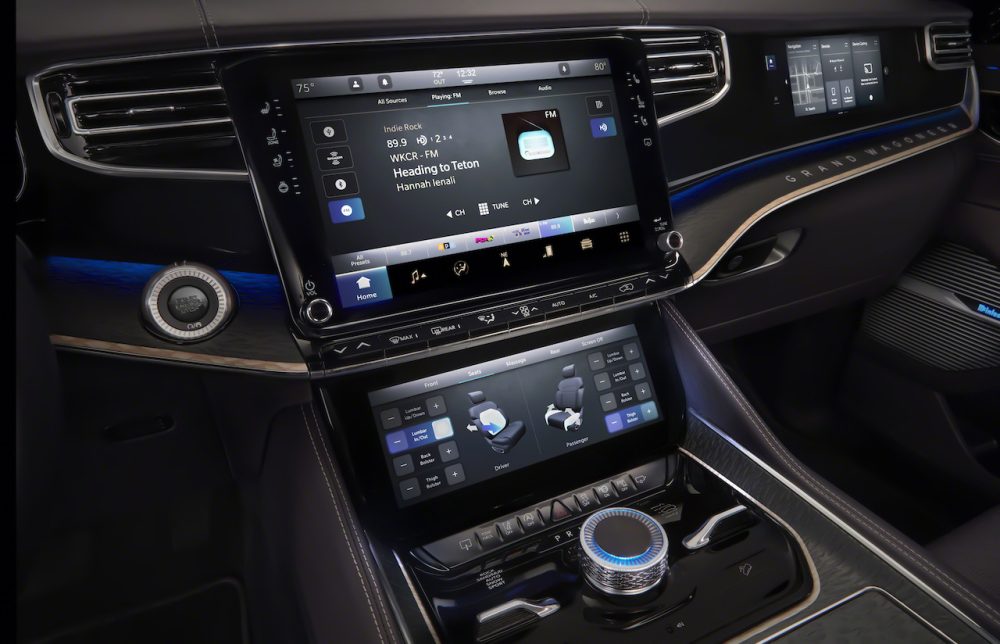 Rising gas prices or not, many of us have to spend much of our day in our cars, and manufacturers have responded by merging the home environment with the mobile one. Depending on where you live and what you drive, your vehicle might even be posher than your home. Queen Elizabeth’s 1953 Rolls-Royce Phantom IV Landaulette (which recently sold at auction for just under $3 million) is probably at the top of that list. The current Rolls Royce Phantom still tips the scale at around $500K, but that can easily double, depending on the accouterments.

Assuming that you drive your car, instead of being driven around, we’ll sidestep some of the more expensive things on the list. We’ve spent time with the Naim system in the Bentleys, the Bang & Olufsen system in Aston Martin, and the Burmester system in the S-Class Mercedes. All about a $6K upgrade, all worth the price asked.

Everyone’s In The Game

Everyone from Sonus Faber (installed in the new Maserati) to McIntosh (installed in the new Jeep Grand Wagoneer next year) is in the autosound game, so your automotive listening pleasure doesn’t take a back seat to the driving experience. The most significant benefit of this? Now that nearly every car on the market has a premium sound option, cars are quieter than they’ve ever been. This is a lovely side benefit from all this tech in the cabin. Lexus, who began the premium autosound trend in the early 1990s, partnering with Mark Levinson, still offers this as their premium choice. Today the majors all utilize 12- to 18-channel amplifiers, with an equivalent number of speakers and custom DSP voicing to the car. Twenty years ago, you’d have to take your car to a premium aftermarket installer and drop $5,000 – $10,000 or maybe more to have a custom-designed system installed with this level of performance.

The manufacturers providing OEM audio now usually spend 12 to 24 months measuring and prototyping the amplifiers and crossover points, along with driver choice and placement within a car’s interior environment. On a recent trip to Bowers & Wilkins, the people behind the Diamond system in both the new Volvos along with BMW’s 5 and 7 series, commented that “working in a mobile environment is actually easier than dealing with the home customer, because the listening room is of fixed, known dimensions.”Once an initial system is created, measurements galore take place to optimize crossover points, equalization, and driver delay times to get the driver the perfect sonic balance. As with tablets and home audio, a fair amount of time is spent on human interface to make the system as easy to use as possible.

Another classic discussion that some can’t resist is becoming less and less relevant in the car environment. Whichever platform you’ve chosen for your mobile device, both are accommodated on all the major car systems. Unlike BMW’s early foray into the CarPlay ecosystem, no one charges a premium for CarPlay or AndroidAuto anymore. Nearly all of the premium sound systems we’ve sampled connect effortlessly to both of the two major phone operating systems, making the transition from the driveway to the highway a breeze.

Thanks to all the latest Bluetooth connectivity, not much more than a tap or two will have your phone instantly knowing where you are and adjusting accordingly. With nearly every car making infotainment an integral part of their product offering, rather than the afterthought it used to be, screens are getting bigger, just like phones and tablets. It’s as if the major designers have infused iPad DNA into their current cabins. Even base cars now have at least 7-inch screens, with some going much larger. The ultimate manifestation of this is in the Tesla vehicles, which feature 15-inch main screens, (and not much more) in the interior.

Thanks to hands-free phones and distracted-driving laws, Bluetooth connectivity is the norm, and while many cars still offer an AUX input, even this is going the way of the in-dash CD player, almost ubiquitous five years ago. Virtually no one remembers what a cassette is anymore!

What’s a Retailer To Do?

Sell a lot of USB charging cables. Unless you were a high-end autosound install facility, you probably weren’t doing much in the mobile space to begin with. Still, with nearly everyone having their phone with them in the car, there is a wide range of phone-related accessories that are still very popular. If aftermarket car audio is still part of your wheelhouse, the major players are still in full effect. Many of the majors offer some in-dash swaps, particularly in the 2X DIN market for slightly older cars. As most factory-installed systems now use the audio system as a central hub, the days of merely upgrading the deck are all but over.

However, in-dash head units are good enough now that there are still customers wanting more options. With the plethora of aftermarket amplifiers, equalizers, DSPs, and speakers, you can still offer a wide range of customers better than factory sound. Focal, known for its mega high-performance raw drivers, has expanded its lineup of speakers, subwoofers, and amplifiers to its latest Plug & Play series. They now offer a serious upgrade path for BMW, Ford, Peugeot, Renault, Toyota, and Volkswagen speakers. An upgrade for the factory Harley Davidson sound systems is also available.

These systems range from a few simple, drop-in driver updates to complete speaker, amplifier, and DSP upgrades. For your BMW Specific clients, BAVSound has several amplifiers and speaker components available for BMW and Mini customers.

Suppose you’re just looking for better bass. In that case, JL Audio offers component subwoofers and a full line of Stealthbox subwoofers requiring little to no technical expertise to install and that easily integrate with the car’s existing audio system. Having sampled a few of the above examples, it’s amazing how some of the best manufacturers in home audio have applied their knowledge base to the mobile environment, with fantastic results.

With manufacturers paying so much attention to sound quality, we all benefit, and the in-car performance available today is quite spectacular, especially among the premium automobiles. Unless you are out on the fringe of audiophilia, checking the premium sound box (and paying the extra premium) is all you need to do to get great mobile sound.

Regardless of what marque you choose for your next ride, there’s never been a better time to be in your car.