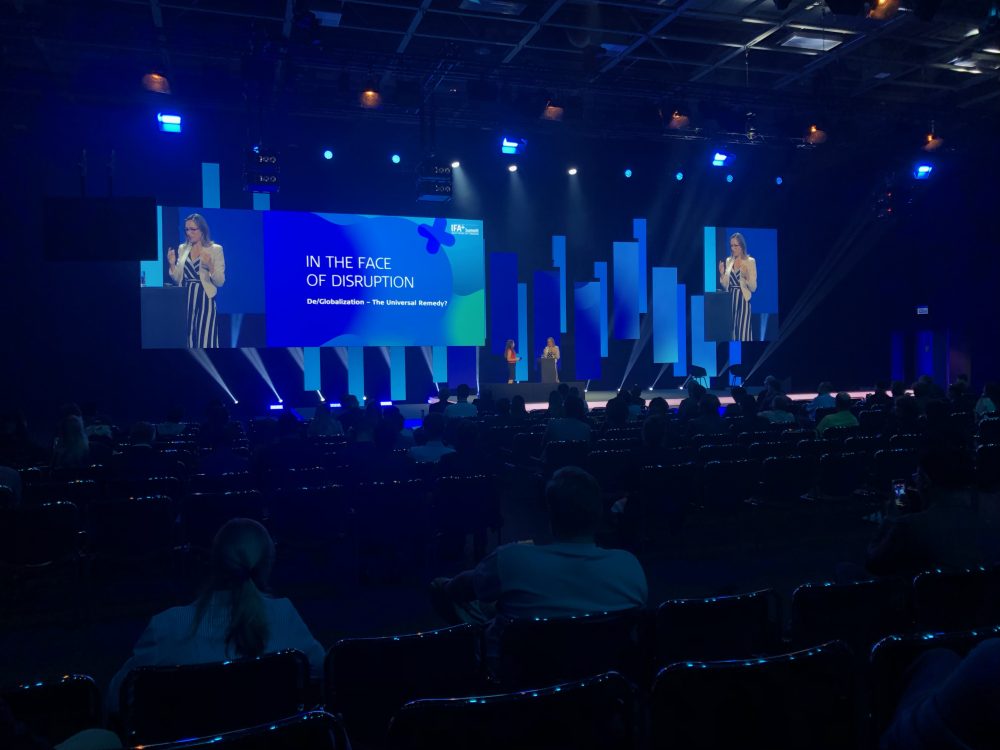 After two days of important keynotes, IFA’s center stage in hall 23 has been repurposed for a different venue: IFA Summit+. The event runs all day and features an endless stream of expert guest speakers as they explore the pros and cons of the polarizing question of deglobalization and whether or not it is a viable option for solving a disrupted global economy.

In the past two years, calls for deglobalization have been the strongest in decades fueled by a global pandemic, a crippled supply chain, the Russian invasion of Ukraine and a series of trade wars centered around protectionist tariffs. IFA Summit+ seeks to explore the effects of deglobalization by examining the issue through a variety of ecological, political and financial lenses. Speakers of the event include Dr. Sara Warneke, Dr. Martin Schulte, and former Greek Minister of Finance Dr. Yanis Varoufakis.

One of the most insightful talks of the event came from Dr. Lisandra Flach, director of the ifo Center for International Economics, on the global supply chain and the effects of reshoring. For those unfamiliar, reshoring is the process of returning manufacturing to a company’s original country of origin.

To quantify global sentiment surrounding deglobalization, a study from ifo found that in 2021 governments around the world imposed 894 new protectionist measures compared to just 217 new liberalizing measures. This dynamic shouldn’t come as a surprise since the past two years have exposed just how dependent the United States and Europe are on a fragile global supply chain that relies heavily on China. To put this dependency in perspective, China is one of the top five trading partners for 7 out of 9 critical raw production materials such as silicon, boron, cobalt and titanium.

So how have companies in the private sector responded to supply chain disruptions and an over-reliance on China? Another ifo survey found that companies plan to reduce machinery and equipment imports from China by 47.9 percent, electrical equipment by 42 percent and data processing equipment by 37.3 percent. The data behind the reasoning for these planned decreases in imports from China shows that 79.1 percent of companies are looking to diversify production while 66.3 percent of companies are turned off by the high cost of shipping.

However, an analysis of economic models from ifo warns of the negative GDP impacts that would result from deglobalizing trade. According to ifo, if trade barriers were to force countries into reshoring their supply chains national GDP would decrease by 9 percent. Moreover, if countries were forced to engage in nearshoring, the process of moving production to neighboring countries, GDP would decrease by 4.2 percent.

Dr. Lisandra Flach wrapped up by saying, “We have geopolitical risks and economic risks that must be considered when firms make decisions about their supply chains.” However, “nearshoring or reshoring is not a solution to make supply chains more resilient to negative shocks.”