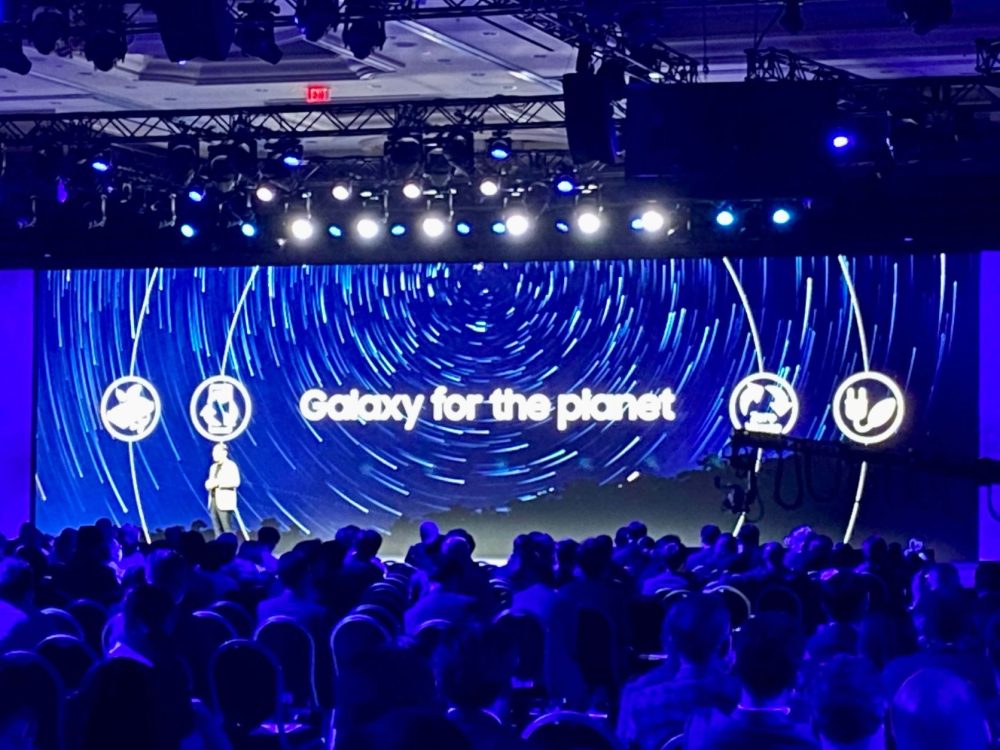 Samsung, one major company that did not visibly reduce its presence at the 2022 CES, delivered its pre-show keynote as scheduled on Tuesday night. In the hour-long Samsung keynote, titled “The Age of Togetherness,” the company talked a bit about new products, but mostly addressed its sustainability efforts, new partnerships, and other more big-picture considerations.

After he was introduced by Consumer Electronics Association (CTA) President and CEO Gary Shapiro, Jong-Hee “J.H.” Han, Vice Chairman and CEO of Samsung Electronics, began the keynote with more than 20 minutes of discussion of the company’s many sustainability programs, while also noting how much the last two years have changed our approach to technology. He did promise that Samsung’s Promised TVs and phone chargers would achieve zero standby power 2025.

While Samsung introduced some new TVs in the days prior to the start of the show, they went mostly unmentioned during the keynote, at least in terms of their technology and features. One new Samsung product that did get an extended look during the keynote was The Freestyle, a new portable screen that the company’s announcement described as “a projector, smart speaker and ambient lighting device all rolled into one lightweight, portable device.” An online preorder for the device, which weighs less than two pounds, is set to begin January 4, at a price of $899.

The company also announced a new Samsung Gaming Hub, which will arrive as part of the new Smart Hub in Samsung’s 2022 line of TVs. The company has announced partnerships with NVIDIA GeForce Now, Stadia and Utomik. Samsung also announced The Odyssey Ark, a new curved gaming screen.

On the appliance side, Samsung announced that new customization is available for its Bespoke home appliances, which will spread to other Samsung products like smartphones, through what the company is calling the #YouMake project.

Samsung also announced a new dive into the smart home, with a new feature, also built into the 2022 TVs and family hub refrigerators, called Samsung Home Hub. As part of that, Samsung announced its participation in the new Home Connectivity Alliance (HCA), whose goals include interoperability among member companies, safety and data security and increased energy efficiency.

There have been similar alliances before, but none at this advanced stage of smart home maturity. The other founding members of the alliance, also announced Tuesday, include American Standard Heating and Air Conditioning, Arçelik, The Electrolux Group, Haier, GE Appliances, and Trane Residential, although other device manufacturers have been invited to join as well.

Samsung will be exhibiting its products all week on the CES show floor.