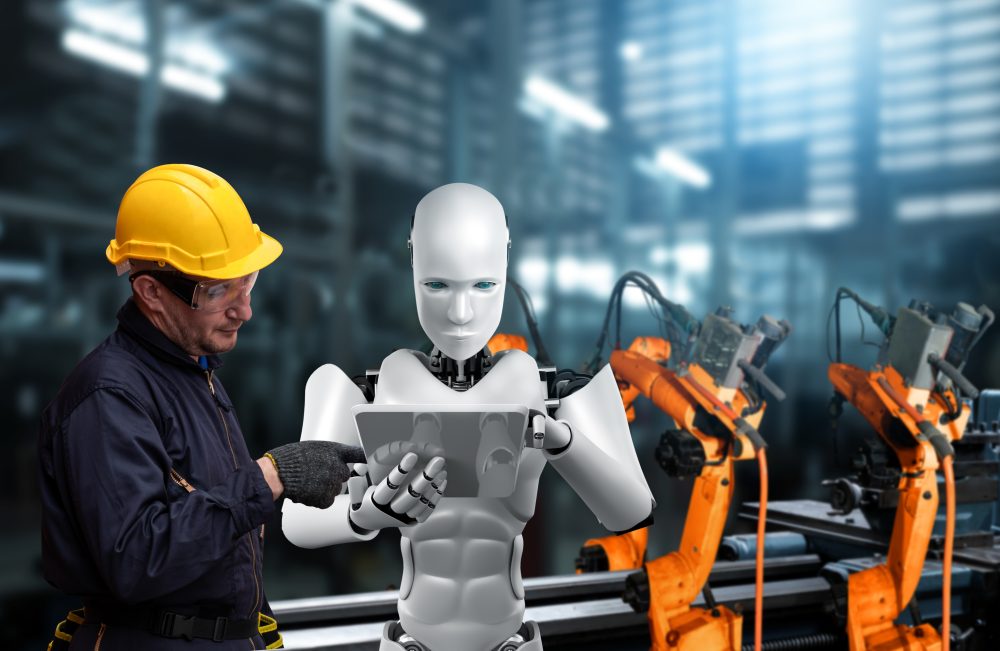 Ever since the first modern robots were developed in the 1950s, the public’s fascination with autonomous machines has varied from excitement and hope to hesitance and fear, and everything in between. In the following decades, single-purpose robots began showing up on factory floors and in mailrooms, and average citizens grew more comfortable and familiar with digital technologies forming a central part of home life. While the dancing, jumping, self-navigating robots of today were still decades away, the controversy then was much the same: workers worried that machines might eliminate their jobs.

As history has shown time and time again, technological advances can disrupt entire industries and remove some tasks from the hands of human operators. However, the systemic effect is that machines are leveraged to make individual workers more productive, allow for the completion of previously impossible tasks, and free up human resources to handle more complicated or mentally demanding work. In many cases, these changes also create entirely new industries, such as the need for robot maintenance.

The meaning of the term ‘robot’ has also changed over time, with autonomous vacuum cleaners, lawnmowers and self-driving cars all falling under the modern umbrella of robots. At the same time, other autonomous machines are in development to perform surveillance, respond to emergencies in dangerous locations, deliver packages, assist in hospitality and retail establishments, and even perform surgery. Looking forward, it’s all but assured that robots and intelligent machines will exponentially advance in both their capabilities and their integration into daily human activities.

A Robot for Everything

Walk into a modern automobile factory, and you’ll see any number of single-task robots performing dangerous, essential jobs with greater accuracy and reliability than a worker could deliver. It’s the same story at food production facilities, where custom-built machines identify, sort, move, and package products alongside human workers. Meanwhile, farmers are beginning to gain access to self-navigating and self-driving tractors at the same time those functions are being made available in consumer vehicles for use on traditional roadways. If it seems like there is a robot for everything these days, perhaps it’s because there is.

As the components and technologies used to build robots have come down in price and complexity, everyone from home tinkerers to global corporations has invested time and resources developing new robotic tools to complete novel tasks for businesses and homeowners. As discussed, the term ‘robot’ is a large umbrella, and some may even consider a device as simple as a subject-tracking motorized surveillance camera to be a robot. The surveillance camera is a good example of a modern robot delivering functionality that was previously impossible or unfeasible due to the costs and labor required.

Today, increasingly rapid advances in autonomous technologies run parallel to a growing use of digital devices and services by average citizens. Countless parts of modern daily life would be unrecognizable to someone from the 1990s, let alone the 1950s. The public’s acceptance and adoption of digital technologies present unprecedented opportunities for robot makers and businesses to integrate robotics into more and more locations and roles, with some existing workers shifting to knowledge- and customer-service-based tasks.

The fervor has also begun to hit non-traditional sectors of the economy, with fast food companies testing small, autonomous delivery vehicles on college campuses,1 manufacturers partnering with airports and hotels to trial guest service robots, and a recent milestone that was achieved when a new robot exceeded human precision in surgeries conducted on pigs.

Robots can help us with everything from menial jobs, like vacuuming the floor, to demanding precision tasks, such as performing surgery. In the next few years, autonomous wheeled robots will likely begin assisting workers in restaurants, hotels, and retail stores by delivering food and products to customers so the humans can focus on conversations, recommendations, sales, and ensuring customer satisfaction.

Many of these locations will already be using control systems, security systems, distributed audio and video networks, and other digital technologies that may directly integrate with robot assistants. By making robots compatible and capable of communicating with existing systems, a hotel could allow guests to order room service through a touch panel with voice recognition, and then have a robot deliver the food and notify the guests on the touch panel or through audio such as, “Your food has arrived.”

In general, the more data an artificial intelligence device can capture, the better it will perform. This fact may influence some businesses to use specific robots and autonomous machines that are designed to be compatible with their existing technologies and can share information in real time. In effect, introducing advanced robotics into environments with compatible systems can increase the value of both the robot and the existing components. This points to the idea of single-supplier solutions, through which a company can develop its internal systems to all work together and rely on the same interfaces and protocols for interactions and updates.

At the most basic level, every robot designed to date has been a tool meant to serve a specific function. With limited functionality or ability to adapt to changes in the environment, most commercial-use robots assist staff rather than replace the need for labor, just like any tool. In fact, companies and their workers can be more productive and have more time to focus on quality and service when robotic assistants help with things like moving goods from point A to point B or providing information.

As new types of robots become available to manage more tasks, business owners and staff will undoubtedly find more valuable needs to devote their efforts to, and will also be required to ensure the proper operation, charging, and cleanliness of any robots visible to customers.

For now, robots are mostly relegated to controlled environments where floorplans don’t change, and weather is not a factor. Still, more capable units will inevitably be able to tackle more fluid and complex situations and environments. As such, the need for human oversight and intervention may grow, such as a new Delivery Manager position that uses an app to observe delivery robots’ progress and help ensure customer satisfaction.

Where We Go From Here

The pace of innovations in robotics has accelerated as more businesses and individuals find use for them in daily life. Consequently, everyone from economists to students has their own ideas and expectations about what robots will look like and what functions they’ll serve in 10 years, 20 years, or 50 years. In the near-term future, we’re likely to see autonomous vehicles enter the rideshare market while smaller robotic vehicles make deliveries and AI-powered drones help first responders locate victims during emergencies.

The growing adoption of “Internet of Things” devices that are always connected and provide constant data is likely to overlap with advances in robotics to deliver benefits we can’t even articulate yet. As all of this progresses, manufacturers and businesses that deploy robotic assistants will have to carefully balance their introductions with the expectations of customers and employees who may need education to understand the value added by the new technology.

Nobody knows when we’re going to see a Rosie-like assistant that can run an entire household, but as robotics experts leverage existing smart technologies, integrate with IoT devices, and develop increasingly sophisticated autonomous capabilities, it might be sooner than we think.