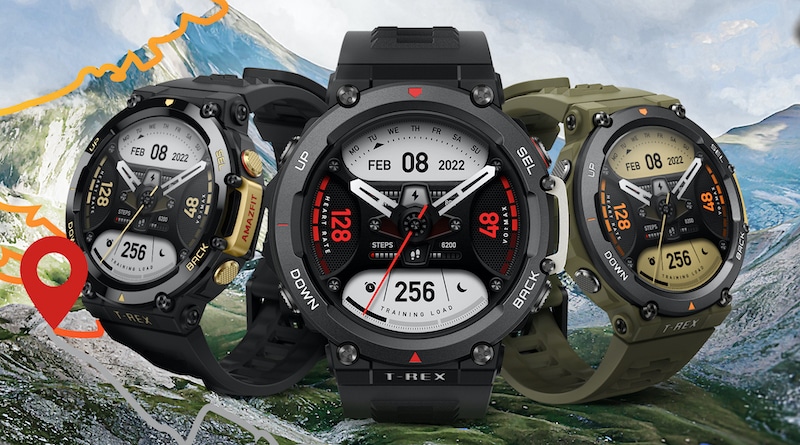 The T-Rex 2 has dual-band positioning and support for five satellite navigation systems, allowing users to run free through the concrete jungle of the city, or explore the most exciting natural trails, with strong and precise positioning.

Its advanced route-import and real-time navigation features make it possible for users to import popular trails from the Zepp App, or take on their new adventures, all while following their movement directly on the watch. Its Direct Return Navigation system can even show users the shortest straight-line route back to the start of their journey.

The device can be operated in extreme temperatures as low as -30℃, making it a great companion for outdoor explorers who need to endure harsh environments.

To help guard one’s health in high-altitude, low-oxygen environments, the T-Rex 2 will alert users when it detects major altitude changes, and prompt them to use its blood-oxygen saturation test function. Users can also measure their blood oxygen whenever they feel uncomfortable, or even set the watch to monitor it all day.

Having passed 15 military-grade tests, the Amazfit T-Rex 2 is capable of functioning through hot deserts, humid rainforests, and polar glaciers.

The watch is designed with solid and distinct angles, while the outer bezel has enhanced durability and texture thanks to a metal-spraying process – with the screen and every button being exquisitely polished.

Able to last for up to 24 days on a single charge with typical usage, the watch has the power to endure any adventure.

The Amazfit T-Rex 2 can resist water pressure equivalent to up to 100 meters, enabling it to accompany users as they brave the rain, rule the pool, and conquer the ocean.

The Amazfit T-Rex 2 features over 150 sports modes, including the toughness-testing Triathlon mode, the professional lap-data recording Track Run mode with smart trajectory correction, and the new Golf Swing mode. The watch can be used to monitor critical data such as workout heart rate, distance traveled, movement speed, and calories burned in real-time for most sports modes, to help users track and improve their performance.

Read the full version of this story at IFA Newsroom