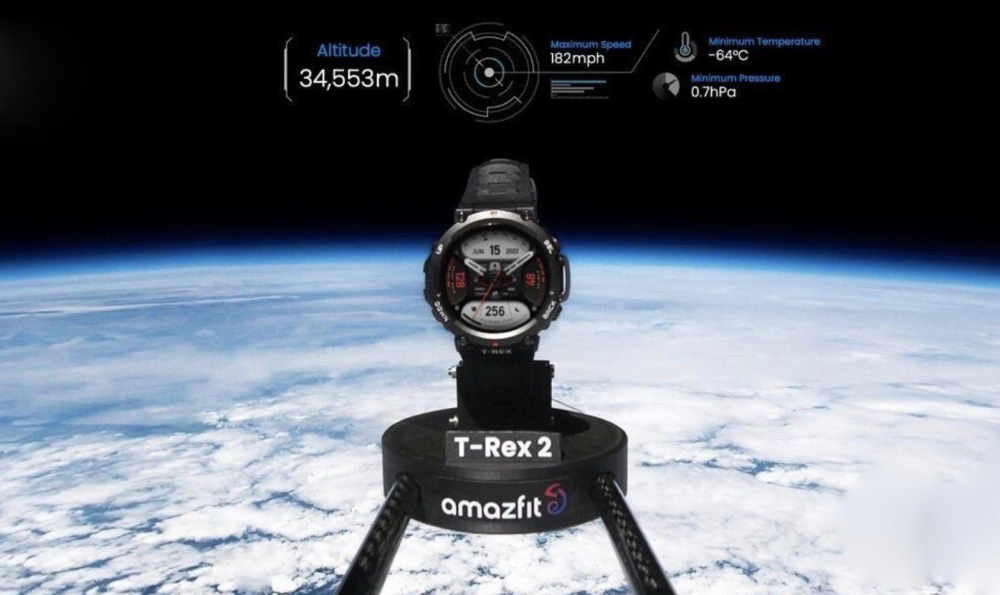 Not wanting to be outdone, smartwatch manufacturer Amazfit has sent its rugged outdoor GPS smartwatch, the Amazfit T-Rex 2, into space on a quest to prove its strength in extreme environments.

The Amazfit T-Rex 2’s space ride was a way to demonstrate the brand’s spirit of “Up Your Game”, while also fulfilling this watch’s promise to inspire users to “Evolve Your Instinct”.

The watch had already passed 15 military-grade tests, including resistance to high and low pressure, extreme 158°F heat and -40°F cold, plus intense vibrations and shock – which were put to the ultimate test during the smartwatch’s launch to space and return to land.

Beginning in the city of Sheffield in the United Kingdom, the watch was sent into space on a lightweight (balloon) spacecraft equipped with fully functional tracking and control systems, as well as an onboard camera to capture the most exciting highlights during the two and a half hour round-trip.

The smartwatch reached a peak altitude of about 21.4 miles and reached a top speed of over 180 mph during the descent. Along with enduring intense air pressure of less than 0.2% of what we experience at sea level, the smartwatch also resisted freezing temperatures as cold as -83°F.

Commenting on the space ride, one of the spacecraft technicians said, “There’s a lot of smartwatches on the market, but there’s very few I’d be confident to take on one of our launches in Death Valley, or in the glaciers in Iceland, or on an aquatic recovery trip in the Pacific. I mean, this is a smartwatch that can go to space and come back working fine without a scratch.”