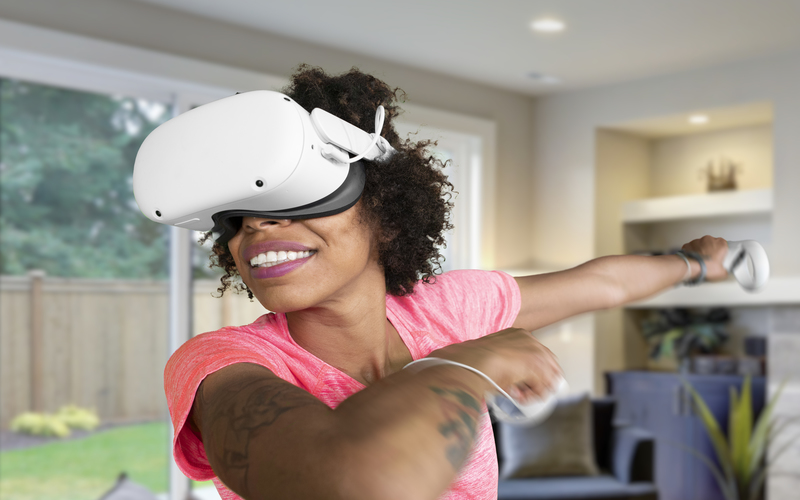 With gyms and fitness centers being some of the hardest-hit industries by the pandemic, it’s no surprise that home fitness — and sales of the products to support it — surged during the pandemic. Many bought exercise machines, weights, Pelotons, yoga mats, and all manner of other gear: According to NPD retail data, health and fitness equipment revenue more than doubled to $2.3 billion from March to October. Sales of stationary bikes tripled, while treadmills shot up 135 percent; Peloton reported revenue of $758 million in 2020, a 232 percent increase from the same period the previous year.

During the same period, interest in and sales of virtual reality headsets received a bump as well. Stuck inside for months on end, many found refuge in VR as a means of virtually escaping the confines of their own domicile. While we don’t know the exact number of VR headset sales out in the wild today, there’s reason to believe that number is now in the tens of millions. As of January 2020, PlayStation VR alone had sold 5 million units, and that’s only one of the many VR headsets on the market; there’s speculation that the Quest 2 tripled its sales rate. Likewise, 71 percent of headset owners say they spent more time in VR during the pandemic.

Analysts concur. “Since the launch of the Quest 2 up until now (the nine months from October 2020 to June 2021), VR hardware sales have grown 163% YOY,” NPD consumer electronics industry analyst Ben Arnold told Dealerscope. “We expect 2021 will end the year 40% to 50% above sales levels we saw for 2020.”

This combination has found a sort of synergistic overlap in the rising popularity of virtual reality home workouts. Indeed, VR fitness can take many forms. Supernatural, for instance, sends objects and targets flying toward you, tasking you with squatting beneath the former and punching the latter, and progressing through various locations around the world while doing so. FitXR, on the other hand, taps into one’s competitive spirit: with up to six other VR users joining for boxing or cardio dance classes, as the users attempt to outscore their opponents in tests of speed and dexterity. RacketNX is like pinball meets racquetball. There is also a whole host of “accidentally exercise” experiences on the market, like the massively popular rhythm action game Beat Saber (which is essentially like Rock Band or Guitar Hero, but using your arms and legs rather than plastic instrument controllers to hit note timings), as well as the strenuous climbing simulator The Climb. (While not typically branded and marketed as exercise experiences, plenty of folks are using these games as such.) Many of these experiences employ subscription-based business models, with subscribers gaining access to new routines and workouts each month.

Interface-wise, not all of these VR exercise experiences are standalone. Several VR cycling apps require the user to own a specialized stationary bike, or more conveniently, an affordable sensor that allows any stationary bike to work in VR. (Some apps, like Holofit, are compatible with any bike that supports the FTMS Bluetooth protocol — no extra sensors required.) Likewise, several apps allow users to incorporate their existing elliptical or rowing machines in a similar manner, with software built around the unique kinds of fitness interfaces they provide. Instead of rowing or cycling in your living room, one can instead row through exotic locations around the world,  with dynamic goals and challenges rather than self-imposed ones.

In terms of hardware, most of the popularity seems to be centered around the Oculus Quest and Quest 2 headsets, for a handful of reasons. Both versions are among the most affordable VR headsets out there; if you’re going to be sweating all over a gadget, better it be a $300 Quest than a $1,000 Valve Index. The Quest also has perhaps the largest selection of exercise-centric titles (though many are certainly available on other platforms). Perhaps most of all, however, it’s the all-in-one, untethered nature of the Quest that seems to be making it the platform of choice for working out in VR. Rather than being tied to a PC via a number of nagging cables, having the freedom to move around your indoor or outdoor space with abandon (still minding the furniture/windows/pets/cliffs, naturally) makes for a freer, more natural exercise experience.

Even as the pandemic becomes less acute, it seems likely that many will continue working out from home. One of the primary drivers here is convenience, and VR certainly benefits from this. Rather than having to drive or otherwise commute to the gym for a 30-to-60-minute workout, simply putting on a headset for a few shorter workouts throughout the day can have the same cumulative effect, and better break up one’s workday. The fact that these experiences are “gamified” — that is to say, built around technology and game mechanics that make working out more engaging, and feel like less of a chore — is also a major factor. In a few studies, what’s called the “rating of perceived exertion” — that is, the participant’s notion of how hard they feel they’re working when exercising — has been found to be lower in VR exercise, compared to when engaging in typical exercise. In other words, one’s perceived exertion is lower than what it actually is, which produces better results and longer-term commitments. And isn’t that what exercise is all about? Fitness applications represent another potential killer app for the rapidly advancing and expanding technology of virtual reality, and retailers would be well served to leverage this unique opportunity to get more consumers working out at home.