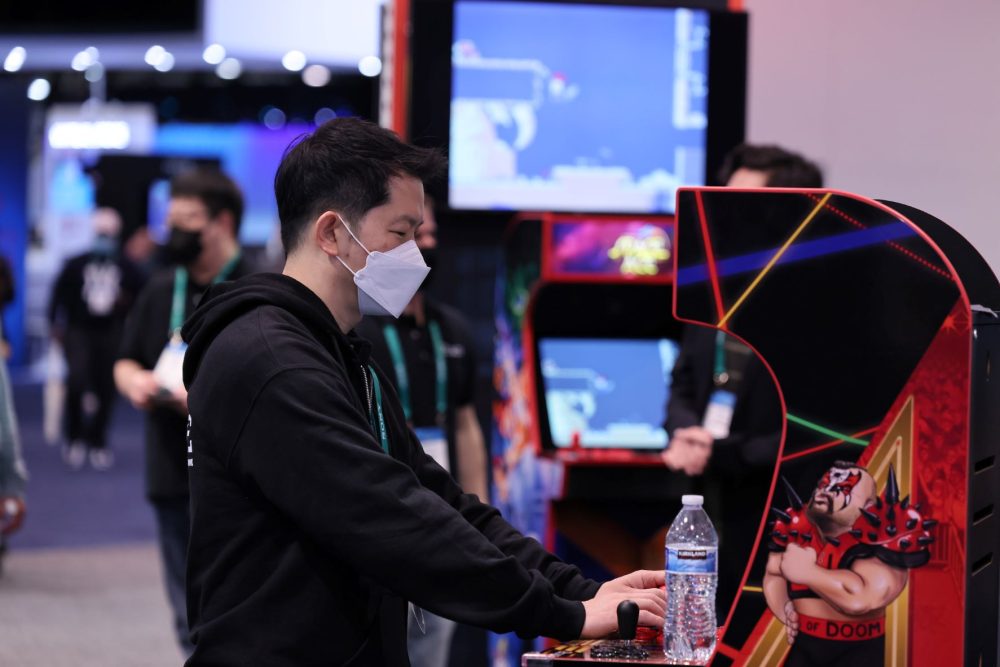 CES is to PC gaming hardware what E3 is to console gaming software: ground zero for all the newest, most cutting-edge products the consumer electronics industry has to offer. Interestingly, perhaps the most exciting trend at this year’s show was a spate of monitors and televisions designed with gaming in mind: new display technology, more interesting form factors, and faster refresh rates (thanks in part to HDMI 2.1 integration—more on that in a bit). Of course, this year’s show was another big one for gaming hardware in general, with manufacturers showing off a slew of gaming laptops, VR headsets, and more. We combed through this avalanche of unveilings to come up with some of our top picks from the show.

Display technology feels like it’s reaching new heights at a regular clip these days, and manufacturers had an impressive range of gaming monitors at CES 2022. Samsung, for one, showed off the world’s first QD-OLED display in the form of its Odyssey G8QNB 34-inch gaming monitor, with an ultrawide 1440P, curved design, and a 175Hz refresh rate. QD, or “Quantum Dot” technology has made it into QLED TVs, but combining it with OLED means big things: the contrast levels and black blacks of OLED combined with the bright, vibrant images generated by QD. For gaming, this also means faster response times and improved HDR. Dell’s Alienware brand will be putting its spin on the technology as well, using a very similar 34-inch panel manufactured by Samsung, in the form of its AW3423DW. Alienware expects to ship the display in the U.S. on March 29th.

Samsung had much more in store in terms of gaming monitors, though. Its Odyssey Ark is a massive 55-inch curved monitor that can rotate between landscape and portrait orientation. The company’s ultra-thin, 32-inch, 4K M8 monitor was also a standout for gamers, featuring the ability to play games over streaming services, without a connected PC. It even lets players connect wireless controllers directly to the monitor. For those looking for a minimalist gaming setup—well, this is about as minimal as it gets.

For its part, Acer showed off a pair of new gaming monitors, the Predator X32 and X32 FP. Both are 32-inch monitors with 576 Mini-LED zones (the X32 supports G-Sync Ultimate but not HDMI 2.1, while the X32 FP supports HDMI 2.1 and FreeSync), with 4K resolutions and refresh rates up to 165Hz. The monitors will retail for $1,799 and $1,999, respectively, and are expected to arrive in Q3 of this year. HP’s Omen 27u is the first HP gaming monitor to support HDMI 2.1, and also features AMD FreeSync Premium Pro adaptive sync support. The HP Omen 27u is slated to launch this spring with a retail price of $699. Additionally,  LG’s UltraGear 32GQ950, is a 4K display that also supports HDMI 2.1.

Speaking of which: While gaming-specific TV sets are less of a “category” unto themselves, quite a few of the newest TVs support HDMI 2.1. High-end gaming monitors have largely supported this standard in recent years, but this is a relatively new development for TVs, and means improved bandwidth, from 18 gigabits per second (HDMI 2.0) to 48Gbps (HDMI 2.1), as well as resolutions up to 10K and frame rates up to 120 frames per second. Sony even went a step further, promising that all of its new 2022 sets will support Variable Refresh Rate (VRR)—a key feature for getting a smooth framerate without artifacts. Sony’s new flagship A95K Series features a QD OLED panel, to improve the image and black levels even further.

Gaming laptops were not in short order at CES. The Razer Blade 14 (2022) is the perfect example of this, with the 14-inch model — it can even be ordered with an Nvidia RTX 3080 Ti. Alienware’s m17 R5 Ryzen Edition also uses AMD’s new high-end processors, the Ryzen 9 6980HX CPU and RX 6850M XT GPU, with improved power optimization that should make it one of the longer lasting 17” laptops out there—without sacrificing performance.

Asus’s Republic of Gamers (ROG) Zephyrus Duo 16 is a dual-screen gaming laptop, with a 16-inch display and a second 14-inch 4K touch display that rises from above the keyboard when you lift the lid. For gamers, among other uses, this means you can have both a fast 4K display, as well as an even faster esports-ready display in one laptop.

And a note about GPUs: With its Ryzen 6000 H-series, AMD is offering a huge improvement in integrated graphics performance for laptops—in fact, two times the performance of previous Ryzen 5000 mobile processors. NVIDIA is no slouch, either: The company revealed the RTX 3090 Ti, with 40 teraflops of performance and 24 GB of GDDR6X RAM. Don’t expect it to be cheap—its predecessor, the 3090 is $1,500—but for those looking for absolute peak performance from their gaming rig, this will be tough to beat.

Sony’s official announcement around PSVR2 for PS5 was certainly the biggest VR news of the show, and one of the biggest in games overall. Alongside an exclusive game set in the Horizon Zero Dawn universe, Sony announced some important specs: 4K HDR OLED displays with a 110-degree field of view, at 2000×2040 resolution for each eye, and framerates up to 120Hz. Using “inside-out tracking,” it will not require a camera tracker like its predecessor, and perhaps most excitingly of all will integrate eye-tracking as well as haptic feedback, similar to that found in the PS5’s DualSense controllers. PSVR2’s “Sense” controllers will also integrate haptic feedback and adaptive triggers, to foster deeper interaction.

The other big VR announcement came from a newcomer to the scene Panasonic, which introduced the MeganeX, a compact VR headset that weighs just over eight ounces and has a dramatically smaller footprint on the user’s face than existing headsets. The headset will work with SteamVR, and its foldable frame sports 1.3″ (2560×2560) displays for each eye, and speakers built-in. The company says it should be out this year, for less than $900.

While it’s impossible to include all of the gaming offerings of CES 2022 here, there were some other highlights. Arcade1Up and iiRcade are both offering new home arcade units: Arcade1Up announced the first cabinet in its top-of-the-line Pro Series, Killer Instinct, and it’s got all the frills: bigger screen and speakers, Suzo Happ sticks and buttons, and online multiplayer, to name but a few. iiRcade’s first premium machine will be the hit side-scroller Dead Cells, which comes in a new form factor, with elaborate cabinet artwork and even a lit marquee.

In gaming headset audio, HP brand HyperX announced the Cloud Alpha Wireless, a headset built for use with PC and PlayStation consoles. The standout feature is a battery that the company says will last up to 300 hours on a single charge. That’s a massive leap—most existing headsets cap out in the low double digits in terms of hours—so should be an enticing proposition for those looking to spend less time tethered to their PC or console. (Editor’s note: The HyperX Cloud Alpha Wireless is a 2022 Dealerscope IMPACT Award winner.)

Finally, in the realm of crazy prototypes that may actually be released, Razer’s Project Sophia is a wild, modular gaming rig in the form of a desk, with a supercharged PC and monitor built into it, along with various accessories for the discerning gamer. The desk itself is essentially one large modular display, while also providing inductive charging for peripherals and other devices. Oh, and it looks like something out of Cyberpunk 2077.