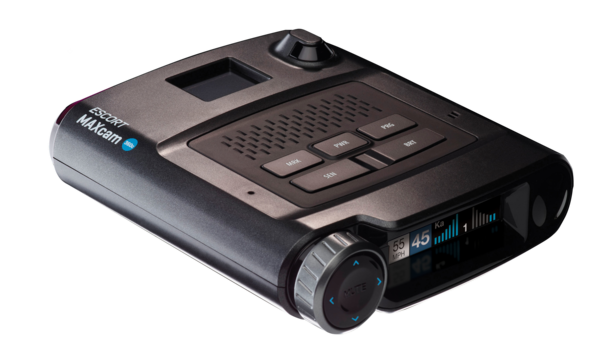 As road data in cities like New York can attest, traffic is on the rise —along with car sales and prices. Not surprisingly, accessories like radar detectors are experiencing a concomitant bump in sales, and many, like the Escort MaxCam 360c we recently tested, are becoming increasingly more sophisticated.

Simply being able to detect all the radar bands police use to scan roads isn’t enough these days. Radar detectors also have to be connected to the cloud to obtain red-light and speed camera locations, get software updates, and trade crowd-sourced information about hazards ahead. Radar detectors also have to connect to smartphone apps, include Wi-Fi and Bluetooth, and come with integrated dash cams. The latest top-of-the-line Escort MaxCam 360c has all of this, and more.

Although others, such as the Cobra Road Scout Elite, have already integrated a dash cam into a radar detector, the MaxCam 360c is Escort’s first model to do so. On the radar side, it scans for all the available bands using dual antennas and a Lidar detector to cover what’s ahead and what’s behind you on the road. That proved helpful in registering law enforcement cruising up behind us on at least two occasions. Directional arrows on the detector’s display tell you where the radar is coming from, including radar speed signs used around construction sites and school zones so that you know to slow down earlier.

On the video side, the dash cam records scenes in 1440p, and the clips we sampled, even those recorded at night, looked crisp and clear. The MaxCam 360c is set to record continuously by default and will also permanently save “events” triggered by an internal accelerometer, should you be involved in a fender bender. You can upload videos to the cloud, view them on a smartphone, or simply transfer clips using the microSD card.

Over more than 800 miles of road testing, we found the Escort MaxCam 360c was a reliable companion, faithfully reporting K and Ka band speed traps. In terms of sensitivity, it appeared to deliver warnings just a half second or more before an older Escort Redline detector. These anecdotal results were based on detecting regularly stationed speed traps. Of course, there were also several surprises, including laser hits, but the alerts were early enough that on at least one occasion we let another driver cruise past us only to witness that car being pulled over moments later by police.

While no detector is perfect, the Escort MaxCam 360c seemed to keep false alerts (such as those from security and other wireless systems) to a minimum, automatically muting about 50 percent of the false readings we usually get along one route. The company also employs filters to minimize potential interference from in-vehicle technology like blind-spot detection and collision-avoidance systems. We found no problems with any driver-assistance systems.

The Escort MaxCam 360c is easy to install using a supplied suction windshield mount. It’s also relatively simple to operate using a dial with an embedded four-way directional pad on the left-hand side to allow you to cycle through menu options like volume levels.

For more control, there is Escort’s associated Drive Smarter app, which includes live traffic data and navigation. It can also be used to take a quick picture using the detector’s camera or to save a video clip. If you’re quick, you can also use the app to report a construction area, speed trap, or traffic jam to other Escort users via the cloud. Conversely, it will speak to you, warning there’s a “red-light camera ahead” while you are driving. In general, we found the red-light camera alerts to be accurate, although like other apps and detectors it will sometimes alert you to cameras positioned on adjacent roadways rather than the highway you’re actually on.

The Escort MaxCam 360c is a full-featured detector and is priced accordingly at $850, pitting it against the likes of the Valentine V1 ($499) and Uniden R7 ($600). While the MaxCam 360c is considerably more expensive, none of the top-of-the-line competitors include a dash cam. Furthermore, with fines in many states costing hundreds of dollars – plus surcharges and points that raise insurance premiums – the price tag may seem well worth it to many drivers. While pandemic-era sales are difficult to predict, the radar detector market is expected to grow from $343.1 million last year to $463.7 million by 2028, according to Fortune Business Insights. But no matter how large the market gets, we expect the Escort MaxCam 360c is going to be a significant player going forward.

EVs Are Here to Change the Retail Landscape