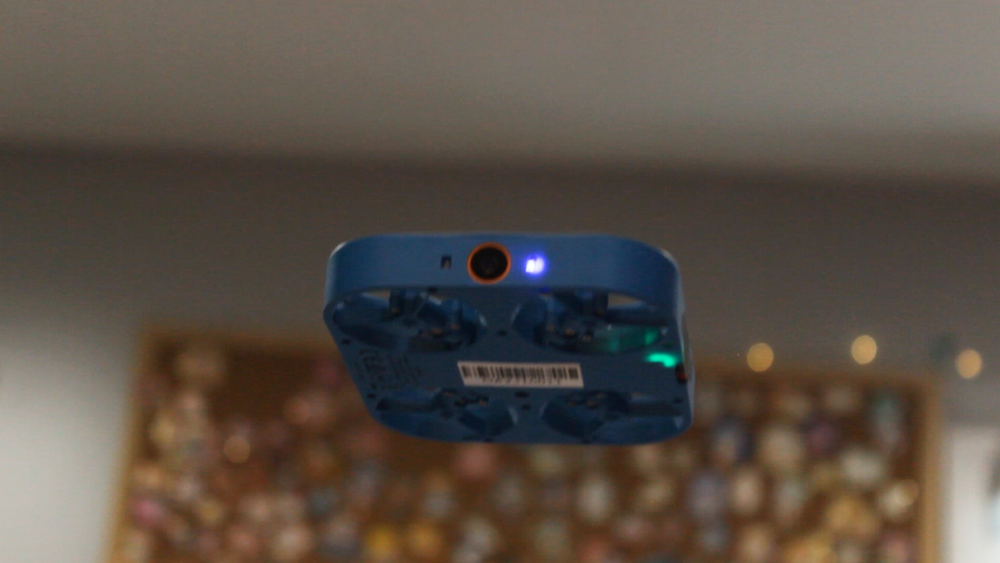 Remember the selfie stick craze, and how people went a little overboard and got selfie sticks banned in most major amusement parks? It was a big social media boom, but people mostly went back to relying on their arms and front cameras on smartphones for a selfie. What if the next new selfie craze will be with drones instead of sticks? I had the opportunity to try out the Neo Air Selfie Drone to see.

Hands-On with the Neo Air

The first thing I noticed when I got this drone was how small it was. The Neo Air drone and the travel case are small enough to fit in my clutch purse so I didn’t have to carry a camera bag. It could easily fit in my hand, and I was impressed at how light the drone was. I could see myself traveling with the drone, because it won’t weigh me down and it doesn’t take up too much space. Setting it up wasn’t a problem because there was a QR code that took me straight to the app in the App Store. When I opened the app for the first time, I was given a quick tutorial on how to connect my device to the drone. After 10 minutes, I was ready to take my first drone selfie.

I was able to take pictures and record videos, but my experience with the app wasn’t the greatest. Sometimes it would crash when I’m trying to switch to different controls, and it was hard to tell if the picture was taken. I would click the camera button multiple times, but the app would freeze sometimes while taking the picture. Strangely, I didn’t have these issues when recording video footage, but when the drone was hovering, the footage started to get a little shaky. If you want to move around in your video, you can set the drone to a face detection feature and the drone will follow your face to keep you centered in the camera lens.

While using my phone to control the drone, I got a bit confused about why the drone would have a delay on certain commands. At times the drone would continue to fly in one direction even though I stopped moving the controls. Having this delay caused the drone to fly off on its own — and it almost crashed into me — but after moving out of the way, I quickly landed the drone. I assumed the lack of response to my controls was due to a low battery, because the drone was perfectly working a few minutes prior. The app would notify me of the battery status and not take any more commands until I charged the device. (Charging the Neo Air was no hassle since its travel case acts as a charger as well, and the drone can reach full charge in a matter of minutes.)

One feature I did have fun with was how the drone will easily land in the palm of your hand. I was a bit scared to try out this feature since the drone has moving blades, but after it landed in my hand for the first time I quickly got used to it. The drone gently landed in my hand and the blades stopped instantly. Thanks to the Neo Air’s fully-enclosed case design, the blades won’t hit your hand when it lands, and it makes the device safe to fly indoors. This feature is useful when you want to take a quick selfie in a crowded spot where a selfie stick would just become a bother.

All the pictures taken on the drone were saved to my device and the micro-SD card in the drone. I liked that the drone already came with a micro-SD card, because that saved me the extra hassle of having to buy my own if I wanted internal storage. The one downside is that I will still have to buy a card adapter if I want to save or view the pictures on my computer instead of my phone. But the Neo Air makes up for this by giving me the ability to share videos directly to social media from my phone. All pictures and videos were saved in the app and on my device, so if the file doesn’t save to my phone properly, I can always use the app as a backup.

If you want to record video for Reels or TikTok, this drone could help capture your subject — or you — without anyone having to be behind the camera. I could see social media influencers using this more often to film their TikToks or Reels out in public. If the small issues I had on the app could be fixed, the future for the Neo Air Selfie drone looks bright. Hopefully, this trend of selfie drones doesn’t cause the device to be banned from almost every amusement park like its predecessor. The Neo Air selfie drone can be purchased online and goes for $159.95.