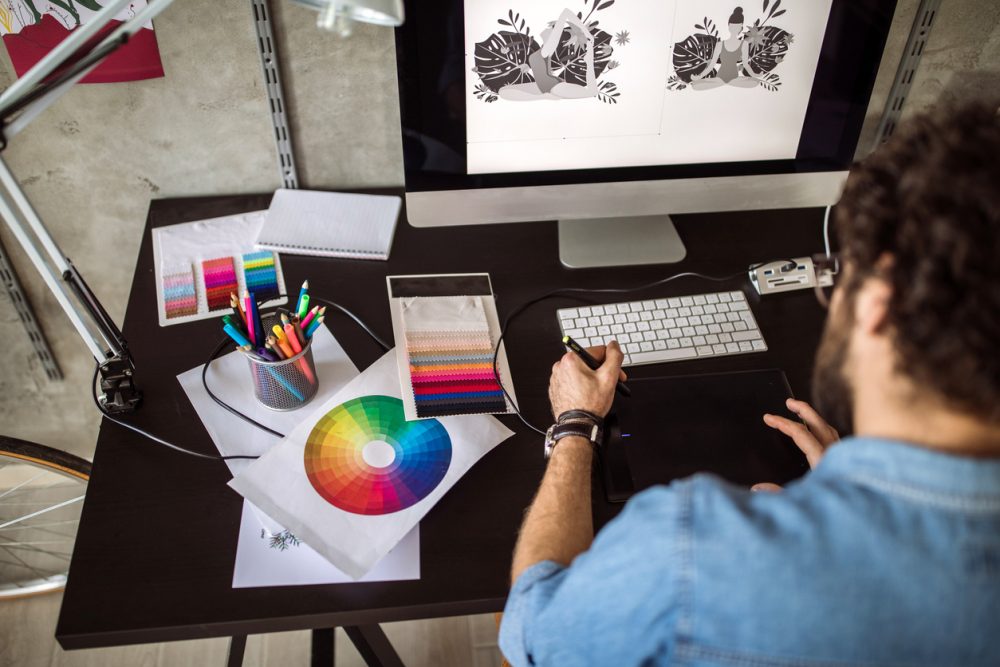 While svelte laptops and desktop towers still dominate the home computing space, those in various other shapes and sizes are becoming more and more common. Aimed at a number of different consumers but often with the “creative professional” in mind, these computers eschew standard dimensions to find their niche in a wide array of home offices and studios. We’ve selected some of the most compelling offerings on the market, whether you’re looking for something tiny that blends into the background, or an all-in-one machine that serves as the centerpiece of your creative workspace.

The Mac Studio is a compact, boxy computer that’s designed to live on your desk; for reference, it’s about the size of two Mac Minis stacked atop one another. It’s heavy, and not really designed to be ported around, but in a pinch, it can be. Most of all, the Studio is powerful: Running on Apple’s latest M1 Max or M1 Ultra chips (depending on which model you opt for), it’s essentially a beefy desktop computer that would normally live inside a massive case, shrunk down to something that sits neatly in the corner of your desk. It’s got plenty of ports—including six USB-C ports, two of which are on the front—and is whisper quiet, even with the fans all the way up. Prices start at $1,999 for the base model, while the top-of-the-line model goes all the way up to a whopping $7,999.

The Yoga AIO 7 is possibly Lenovo’s most exciting PC design to date. Something of a response to Apple’s iMac, this all-in-one desktop goes a step further by incorporating a rotatable hinge—meaning the touchscreen display can be turned from horizontal to vertical, making it easy as pie for users to read webpages, PDFs, Word docs and vertical videos in their native format. The display itself even supports integrated wireless casting, letting users send videos from their smartphone or tablet directly to the screen, without having to so much as touch the computer. The display can be tilted from flat to up to 20 degrees for viewing comfort; the JBL Harman-certified stereo speakers are positioned under the rotating display, ensuring that audio is always aimed at the user, regardless of the screen’s orientation. The AIO is powered by the AMD Ryzen 7 4800H CPU and uses an Nvidia GeForce RTX 2060 for graphics, making it well suited for content creation and games. Available for $,1999.

With its most recent iteration of the iMac, Apple has once again redefined the design possibilities for all-in-one computers. The entry-level iMac comes with Apple’s own M1 chip, as well as 256GB of SSD storage, two Thunderbolt / USB 4 ports, 8GB of unified memory, and a seven-core GPU for $1,299; it scales up from there, both in terms of price and performance. Then, of course, there’s the best-in-class, 4.5K Retina display—a bump up from its predecessor’s much-celebrated screen, and complete with Apple’s True Tone technology, which automatically adjusts colors and intensity based on your surroundings. Oh, and it comes in seven colors: blue, green, pink, orange, purple, yellow, and silver, for whatever your stylistic needs.

For visual artists looking to draw and design digitally using a stylus, the Microsoft Surface Studio 2 is likely the single best creative all-in-one computer around. The 28-inch touchscreen display panel is mounted on what Microsoft calls a “zero gravity hinge”—a spring-assisted, dual-hinge stand that allows the screen to be oriented upright for traditional desktop use, or low (similar to that of a drafting table) for comfortable drawing and designing. The Surface Studio 2 comes with a Surface Pen, an excellent stylus that can hit 4,096 levels of pressure sensitivity and tilt support, making for a very natural on-screen drawing and writing experience. Available with an Intel Core i7 CPU, 16GB RAM, a 512GB SSD, and an Nvidia RTX A2000 GPU for $2200.

Raspberry Pi has been the de facto inexpensive, single-board computer for more than a decade now, and the latest 4B model is the most powerful to date. Starting at just $35 for the 2GB model, the Pi can function as a web server, a dedicated game emulation device, an educational PC for kids, a media center hub, and much, much more. It uses a 1.5-GHz Broadcom CPU/GPU combo, and sports four USB 3 ports, two micro HDMI ports (with support for 4K displays), a Gigabit Ethernet port, and a microSD card slot. Beyond traditional computing or media hub duties, the beauty of the Pi has always been its flexibility: if you’re looking for a tiny computer to power your DIY robot or custom Internet of Things (IoT) device, it’s tough to find a better fit. Most recently, the 8GB  model came out, with enough RAM for serious computing and productivity work.

Something of a compromise between the deep flexibility of the Raspberry Pi and the plug-and-play ease of use of a traditional desktop PC, the Chuwi HeroBox Pro maintains a low profile (​​7.36” x 5.43” x 1.46”; 3.1 pounds), letting it squeeze onto even the tiniest of desks (or mount easily via VESA mounts). It’s built with low-power components, capable of running Windows 10 while keeping overall power consumption below 10 watts. It’s not built for gaming or heavy creative work, but it can run basic productivity apps or be used as a home entertainment system in the living room. What’s more, it can be oriented horizontally or vertically, and given its small size and VESA compliance, it’s a great PC to use for running digital signage or a gallery installation.