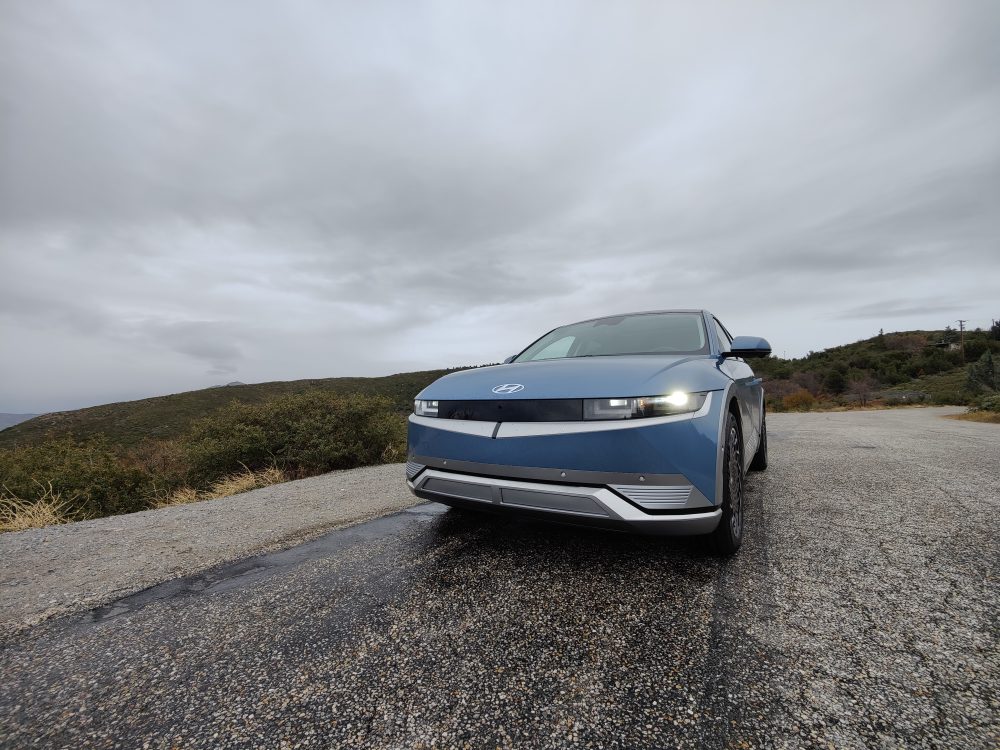 Wending along the serpentine curves of route 79 in Southern California, I’m testing the quiet power of Hyundai’s new all-electric compact SUV. But really, I’m headed for pie country. Jilian’s Pie Company sits near the end of the main street of the eponymous town and is best known for its Dutch Apple pie, a slice of which would have sent Twin Peaks’ Agent Cooper into euphoria. But I’m supposed to be focusing on the latest technology behind the Hyundai Ioniq 5. Hyundai has plenty riding on the new vehicle; with most manufacturers planning to fully adopt electric vehicles (EVs) in the next few years, it will change the landscape considerably, not only in terms of the kinds of cars we drive, but how we use them, refuel them, and even charge them at home.

The Hyundai Ioniq 5 is one of the most striking and forward-looking EVs to come along so far. Its angular lines and minimalist front and rear ends make Tesla’s vehicles look like ’80s retro designs. The compact SUV also comes in several models, from a basic, single motor, rear-wheel-drive edition to a fully loaded all-wheel-drive model. It gets over 300 miles of range on a single charge and can be charged faster than a Tesla Y or a Mustang Mach-E. It’s so new, Hyundai wasn’t able to provide pricing yet, but the car is squarely aimed at the likes of Volkswagen’s ID4 and the Mach-E, so expect prices to hover at around $40,000.

A very capable driver that was able to take the tight double-backs and hairpin turns of the Southern California roads with ease, the Ioniq is also delivered the latest technological conveniences. These include a wireless phone charger, compatibility with Android Auto and Apple CarPlay, built-in navigation and voice recognition, and two 12-inch dashboard displays. Hyundai uses these to great effect, offering side blindspot video views when you hit the turn signals on the highway, as well as front and rear camera views when you get close to an object, and a 360-degree video view to help you park.

A full complement of advanced driver assistance programs is also included in most models, such as rear cross traffic and pedestrian braking systems, lane-keeping assist, collision avoidance, and in the top-of-the-line model, an adaptive cruise control system that learns your habits. After several hours of driving, it will, for example, naturally speed up more quickly or slow down according to how you tend to drive in traffic, using adaptive cruise control.

The Ioniq 5 is so tricked out with tech, you don’t even need a key or key fob anymore. Drivers can use their smartphone’s Bluetooth connection to lock and unlock the car. And when you’re away from the vehicle, the Hyundai app can be used to remotely start the vehicle, check its charging status, and even send a friend a remote digital key so they can open and drive your car.

This is a quick vehicle, able to do 0 to 60 mph in about five seconds, and pass semi-tractor trailers in a split second, but it’s the rapid-charging feature that will convert car buyers. The Ioniq 5 has an 800-volt system, meaning it can take full advantage of super-fast DC chargers at public stations. That means it takes just 18 minutes to take the car from 10 percent to 80 percent of a full charge. It’s a significant difference, considering that I had to wait around for 35 minutes to get the same power into a Mustang Mach-E during one of my recent test drives.

Better still, Hyundai is offering new Ioniq 5 owners two years of free charging at public Electrify America stations. And Robert Barrosa, Electrify America’s senior director of sales and marketing, explained that the company continues to expand its network of about 800 stations across the country. The Federal Government’s forthcoming infrastructure bill will help as well, he said, but it is a multi-stage process that goes state-by-state with separate RFPs in each case before more stations can be built. But Electrify already has partnerships with several retailers, such as Target, to lease spots in parking lots. Barrosa also said some mall retailers will deliver orders to drivers charging up their cars at the stations.

For most EV owners, however, the simplest solution is to charge up at home. Home Level 2 charging stations can bring a vehicle up to 100 percent capacity overnight. And the chargers can be easy to install and cost from $500 to $650. These models are smaller than a breadbox and plug into a 240-volt four-pronged plug known as a NEMA 14-50. Newer homes already have NEMA 14-50 outlets for electric stoves. If you don’t already have a 14-50 plug near the circuit box in your garage, it costs about $200 to $800 to have one professionally installed.

Level 2 fast home EV chargers include the $599 Enel X JuiceBox 40 for $599 and Electrify America’s own HomeStation, which is $649. The chargers usually also include a smartphone app to schedule charges, cool or warm the car before you get it, and let you know when it’s filled up.

Ultimately, such home chargers may result in one of the most profound changes in the retail landscape: the end of the local gas station. Of course, drivers and passengers will still need to take breaks — and hopefully pick up a purchase or two along the way.

Most state utilities across the country offer some sort of rebate on home charging stations for EVs. A few states even offer them for free in exchange for participating in sharing charging information. Here are a few examples of what’s available:

California: Among several rebates offered. Sonoma Clean Power, up in wine country, will reimburse purchasers of Level 2 electric vehicle chargers for the full cost of the unit once it’s been activated on their grid.

Connecticut: Norwich Public Utilities offers a $500 rebate on the purchase of a Level 2 charger while Eversource, another utility in the state, has a $300 reward program for those who buy an Enel X JuiceBox or Chargepoint charger.

Louisiana: Customers of Entergy and Southwestern Electric Power can receive a $250 rebate when they buy a home charger.

Michigan: As the Big Three carmakers look to go electric, DTE Energy is offering a $500 rebate to customers who buy a Level 2 charger and hook it up to their network.

Minnesota: Several utilities in the state offer rebates for home charging stations, including the Lake Region Electric Cooperative, which will give you back up to $500 after purchase.